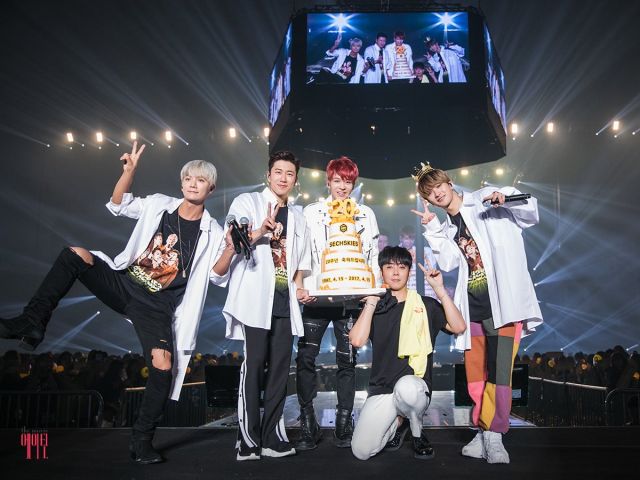 Back during the beginning of modern K-Pop, there was a boy band called Sechskies. I think it's supposed to be pronounced "sex kiss" but the English spelling is really weird so I'm not sure*. Anyway, they were pretty popular for a few years only to abruptly disband without explanation. Then, in 2016, they got back together, and at that point it feels kind of odd to call them a boy band still, since they're all pushing forty, but what can I say? They look pretty good for the age.

While the history of Sechskies is fairly intriguing, "SECHSKIES Eighteen" is unfortunately a standard concert documentary that just assumes we already know the important parts of that story. The main content is just footage that appears to have been taken at random by whatever cameras happen to be nearby Sechskies at various points in the performing process. At one point we even get a cell phone video of the band just huddling under a fixture, waiting for their cue to explode onto the stage.

And explode they do. Whatever merits "SECHSKIES Eighteen" has as a documentary, the members of Sechskies are undoubtedly talented performers who relish the glory of the stage and the love of their fans. We see them undulate and adapt to the movement of the crowd all while singing some great music. Their routines, while not terribly elaborate, are definitely passionate, and it's always a disappointment whenever a song ends. Even an extra verse is met with powerful gratitude.

The ability of Sechskies to fill giant stadiums some sixteen years after their disbandment is a testament to the major impression made on their fanbase. That the fans, like Sechskies themselves, are now much older creates a fairly surreal quality. One woman who came with her husband actually breaks down in tears while being interviewed, because the thought that she would get to see Sechskies perform live after all this time was that much of a dream come true.

I'm inclined to think that "SECHSKIES Eighteen" was produced with such fans in mind. I don't mean in the sense that YG Entertainment especially cares about fans, except to the extent that fans buy records. I mean that the way the documentary emphasizes the performers and their performances, rather than the history of context of Sechskies, is pure fanservice. These precious glimpses of Sechskies, even in casual form, as actual adults- well it's just a little surreal, looking at that and reconciling it to past memories of a long ago youth.

There's one shot I like, of a big tub of beer. We can't actually see the beer- the logos are blurred out for legal reasons. So why are we being shown blurry beer? Because Sechskies grew up. Their music is mostly the same, and of course timeless and classic, but Sechskies and fans alike are different now. That's what makes their reunion so more powerful. Sechskies kept their promise- because the soul of that music was no illusion, it really was as magical as it seemed all those years ago.

*Upon further investigation, I've determined that "Sechskies" is actually two German words, "sechs" and kies" which roughly translates as six gems. Sechskies originally had six members, one of whom declined to join the new group.