[HanCinema's Film Review] "School of Youth: The Corruption of Morals" 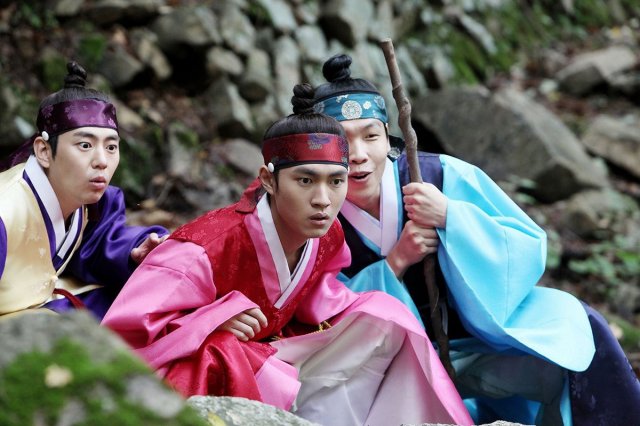 While "School of Youth: The Corruption of Morals" isn't quite pornography I frequently felt while watching this movie like an explicitly soft-core take might have been an improvement over what the movie actually is- a Joseon era sex comedy where the premise is that college students are being kidnapped and raped. This doesn't real sound funny, nor does it come off as particularly amusing in execution. The goofy sitcom style sound effects are especially unhelpful, turning lewd comical contrasts into overly try-hard attempts to get a cheap laugh.

Weirdly enough, after the first act or so these strange flourishes disappear. The rest of the movie this improves slightly, albeit not by that much. "School of Youth: The Corruption of Morals" is filled with weird little moments like this, which give the impression that screenwriter Kim Jin-seon-I was just making up the plot as she went along. I was amused, probably not intentionally, when at one point the idiot trio of main characters observe that they don't actually seem to be trying to figure out who their rapists are anymore.

The sloppy screenplay also comes to mind at several points with unexplained transitions and whole scenes that just seem to be skipped. I probably shouldn't be complaining, given that "School of Youth: The Corruption of Morals" feels like a three hour movie even as its actual runtime is under ninety minutes. It's just rather jarring how the culprits are identified, captured, and brought in for trial so quickly I think there's a decent chance I literally missed all that just by blinking.

The resolution to that mystery, by the way, is not even slightly satisfying. The motive makes no sense. It also somehow manages to be xenophobic. Or maybe it was just designed to make the viewer react with disdain against notorious...smut peddlers? Even ignoring the fact that "School of Youth: The Corruption of Morals" itself is peddling smut, the running gag of one peddler trying to sell his sexy drawings and every so often more helpful wares is a bit counterintuitive in light of the ending.

One of the more interesting ideas in "School of Youth: The Corruption of Morals" is that the main character, for all his gross sex-starved fantasizing, really loves math. He is discouraged from his ambitions because, uh, I guess mathematicians can't find jobs in Joseon? I would think there's probably someone somewhere who would be willing to pay money for somebody who's really good at calculating triangles. Who that could be I have no idea, but it seems like there would be more intuitive ways to use that talent than to calculate rapist height or figuring out the right way to angle spy mirrors.

But then "School of Youth: The Corruption of Morals" is writ large a project that only ever really manages to be interesting by accident, simply because of the inherently farcical worldbuilding. Watching sex-starved college students in olden times behaving the same way they do in modern times is funny.

"[HanCinema's Film Review] "School of Youth: The Corruption of Morals""
by HanCinema is licensed under a Creative Commons Attribution-Share Alike 3.0 Unported License.