[HanCinema's Film Review] "No Tears for The Dead" 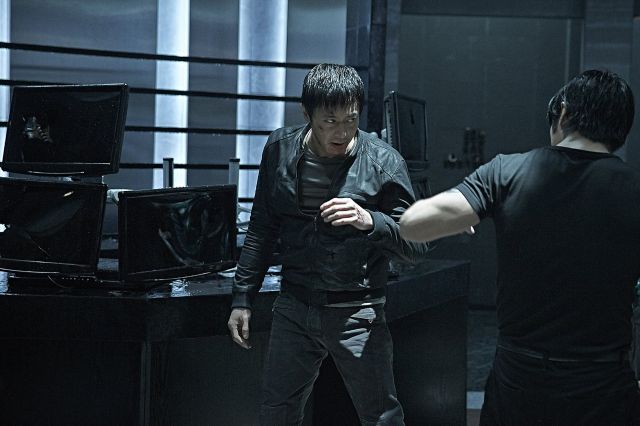 It's pretty telling that the film's main effective emotional moments make a lot more sense without any kind of context. Take Mo-kyeong (played by Kim Min-hee). She's in pain because of the death of her daughter and husband- especially the former, because Mo-kyeong feels guilty about not being a better parent. This is some strong melodrama here- being a good parent is really hard.

Then we flash back to the main plot, and oh yeah, this is a story about assassins and brotherhood and laundered stock money and battles of honor and techno wizardry and, really, melodrama aside, the action here just gets increasingly and absurdly silly. There's so many people fighting each other I'm not even sure who the villain is supposed to be. Well it's everyone. Everyone is the villain, except for Mo-kyeong. Who for most of the movie doesn't even know what's going on. She doesn't even meet leading man Gon (played by Jang Dong-gun) until near the very end.

Yes, Gon is a villain too. He hates himself because he is an assassin and his last job went wrong. They just don't make assassins like they used to I guess. His motivation is never really very compelling. Apparently he has his own issues with kids because as a kid he had a really terrible mom and then something we don't get to see happens and Gon's an assassin with assassin friends doing assassin stuff like gang wars. Which I'm pretty sure assassins don't do, actually.

Hey, I'm not the only one. The movie's technical villain (as in, the guy who hired the assassins in the first place) is frequently screaming his head off about how everything is constantly going wrong for pretty much no reason. If this guy wasn't so blatantly telegraphed as the foreign-educated English speaking Korean asshole guy I'd almost feel sorry for him. I don't know much about assassin's code or whatever, but when I pay somebody money to do a job I expect them to do the job, not get all wrapped up in bushido.

As you can probably guess, this movie's narrative is a disaster. We've got some loose melodrama to frame the gunfights and showdowns, and from the there the story just goes nuts, and not in a good way. At one point there's an arms deal and this black guy goes from casually discussing how great it is living in Korea one minute to everything turning violent for absolutely no reason the next. I sympathize with that guy. You're just having a nice little chat and then boom, the movie decides it's time for another action setpiece.

In terms of the quality of the setpieces? I suppose it's decent. Director Lee Jeong-beom wanted brutal throwdowns between mean assassin dudes here, and that's exactly what we get. There's a good sense of logistics. The international presence is nice too. The spoken English is crude, but dealing as it is with simple emotions like rage, surprise, and disgusted apathy, the dialogue works. "No Tears for the Dead" is servicable in terms of the minimum standards of the genre and I'm sure there's an audience for it somewhere. A pity that the reasonably effective melodrama makes the film difficult to mock, though.

"[HanCinema's Film Review] "No Tears for The Dead""
by HanCinema is licensed under a Creative Commons Attribution-Share Alike 3.0 Unported License.