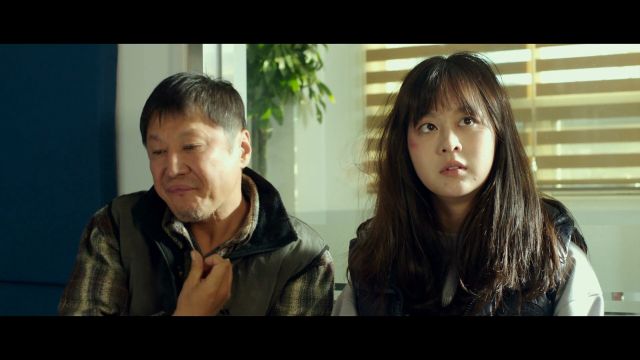 The exploitation film is lurid for the sake of being lurid, enticing viewers with the promise that twisted depraved people will meet twisted depraved ends in the name of morose justice. The social awareness film, by contrast, seeks to make some sort of serious commentary about horrible unseen problems in daily life. "My Little Baby, Jaya" tries to be both of these things, with mixed success.

All right, I'll be honest. I kind of sort of hated "My Little Baby, Jaya" for nearly the entire runtime. We start out with Jaya (played by Oh Ye-seol) killing herself. Also her single dad Won-sool (played by Kim Jung-kyoon) has cerebral palsy. High school bullying and cerebral palsy are conceivably interesting topics in their own right but undermine each other here. Considering Won-sool's cerebral palsy is at least partially why he couldn't do anything about Jaya's bullying, that kind of gives the impression that the social workers we see trying to take Jaya away as a kid had a point.

More than that, though, while initial scenes imply that Won-sool is going to be the main character, in fact, almost the entire runtime is dedicated to Jaya's harassment. The escalation is largely because Jaya does not handle the situation well. First she fails to establish proper boundaries with a boy. Then Jaya makes the bad decision of going vigilante instead of at least trying to appeal to authority figures, allowing her persecutors the chance to claim to be a victim in the context of an official hearing.

That's where the exploitation elements come in- the system has to fail to justify Won-sool taking the law into his own hands. "My Little Baby, Jaya" spends way too much time forcing us to watch Jaya suffer and way too little time giving us the satisfaction of watching Won-sool show those miserable little teenage twerps what real sadism looks like. Sick revenge fantasy, is, at times, a far more satisfying resolution than playing at being the grown-up.

In that sense maybe I was supposed to feel constantly angry that Jaya's situation kept getting illogically worse, and that Won-sool's brief moment of revenge was supposed to feel like an insufficient payoff for all the bad stuff that happened. On the other end the production values are rather mediocre, and Kim Jung-kyoon's cerebral palsy acting is a tad cringeworthy. Maybe you like going to the movies to get mad for whatever reason and in that case, you'll probably like "My Little Baby, Jaya". As for me, well, I figure if you want to send a message, use Western Union.