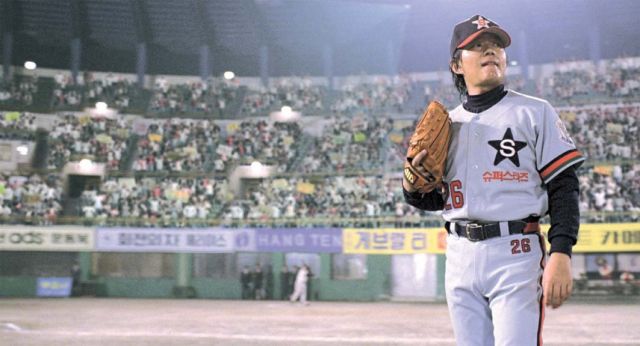 In the early eighties, Mr. Gam (played by Lee Beom-soo) has a modest background. He works in a factory by day and helps with his mom's shop in the traditional market at night. The introduction of a color TV is a big deal for his family. Political agitation exists, but for Mr. Gam, it's the kind of thing he runs into by accident. But most importantly, the wealth of the eighties gives Mr. Gam a chance to fulfill his dream of being a baseball player.

The narrative structure of "Mr. Gam's Victory" is a little off. Where your typical underdog sports story features copious montages of the main character getting good or getting along with teammates, Mr. Gam starts the story out as good a player as he'll ever be. Which to be clear, is still really good. The guy loves baseball and practices pitching every day long before he has any idea that it's even possible for him to turn his dream into a career.

The problem Mr. Gam runs across is that being a successful professional athlete hinges a lot on sheer pure luck. Mr. Gam can't win games single-handedly, and what little he can do in the big picture isn't that much. Anyone who has ever worked in a field that they loved has been forced at some point to recognize that reality isn't like the movies. Glamorous jobs have mundane aspects and frustrations just like normal ones, and a lot of these are baked into the system. For every winning baseball team, after all, there has to be a losing one.

This gets Mr. Gam down, unsurprisingly. But it never gets him out. Mr. Gam is a man who is constantly frustrated by his failures in life, but struggles and mostly succeeds in maintaining his dignity. This is by a loose definition, of course. Observe how his courtship with Eun-ha (played by Yoon Jin-seo) constantly alternates between Mr. Gam finding new ways to make himself look like an idiot. He struggles to even get her to understand that he's a baseball player, not just some guy who likes baseball.

Most of the movie's best gags play on Mr. Gam's feelings of humiliation in this regard. What "Mr. Gam's Victory" lacks in training montages it more than makes up for in comic relief sequences where we see Mr. Gam chronically struggle with unappreciative bosses, co-workers, fans, and even family. But ah, there's the rub- a lot of this is just Mr. Gam projecting his own insecurities onto other people and assuming the worst.

In reality, Mr. Gam has more support than he thinks- and it's those little moments of encouragement that help him keep going. Amusingly enough, the real-life player Mr. Gam is based on only had his big breakout moment after the events of the movie. This narrative construction is quite intentional. Mr. Gam's story is inspiring, not because we see him win, but because we see him constantly trying and believing, however unreasonably, that soon his day will come.