[HanCinema's Film Review] "Marrying the Mafia 5 - Return of the Family" 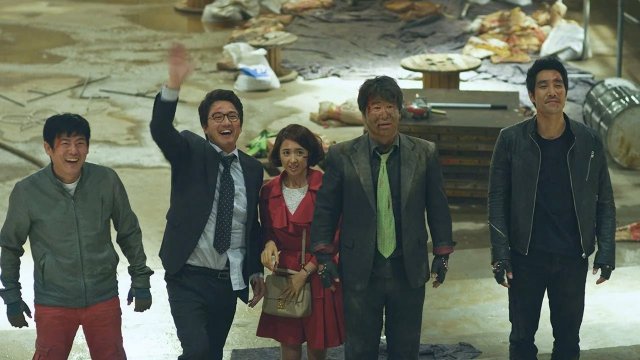 Dae-seo (played by Jung Joon-ho) tragically lost his gangster princess wife from the first "Marrying the Mafia" movie a while back in a car crash. Then we see in the present day that his brothers-in-laws continue to hang around his company being generally useless. Then out of nowhere we find out that Dae-seo's nephew Yeong-min is played by Yoon Doo-joon and yikes, who knew that beastly men could be so dangerous to prequel love interests?

Now, that was a really dumb and bad joke. For it to make any sense, you have to know that Yoon Doo-joon's love interest from "Let's Eat - Season 2" died in the interm between that drama and "Let's Eat - Season 3". You would also have to know that Yoon Doo-joon is best known for being the leader of the boy band Beast, which is now the man band Highlight. But even if we were pretending to be in the year 2012 when that reference was a bit more relevant, the joke still isn't funny.

"Marrying the Mafia 5 - Return of the Family" is that concept applied to a feature length scale. One of the more absurd moments was when I realized that Dae-seo's new love interest Hyo-jeong (played by Kim Min-jung) was actually intended to be a riff on "Tazza: The High Rollers". Even when the joke was explicitly explained via a cutaway, it still wasn't funny. So this moderately pretty woman is better at gambling than her prospective gangster sister-in-laws. So what?

I also describe Hyo-jeong as a love interest in the loosest possible terms. She and Dae-seo have surprisingly little screen time together. Most of the movie is actually dominated by the three brother-in-laws, who come up with a series of goofy plans to torment Dae-so and Hyo-jeong for reasons that are never terribly obvious, especially considering how monstrous these plans are in execution. The whole let's make a fake sex tape to revel in this person's humiliation plot point has uh, not aged well.

"Marrying the Mafia 5 - Return of the Family" runs the gamut from disgustingly out of touch to just kind of boring. The blackface joke is another standout contender in the former category. For the latter Kim Joon-hyun has a role as a jolly doctor who revels in explaining how the conflict created by the previous scene can be solved by pooping. It's weird to think that Sung Dong-il parachuted into this franchise, having replaced a character formerly played by Sung Ji-ru, given that Sung Dong-il is one of the few actors here with much of a career anymore.

Well, him and Yoon Doo-joon, but believe me, Yeong-min's storyline is even less complicated than it looks. Still, he does have the distinction of having an important role in the movie's only genuinely funny scene- the one that involves paddling. It's also the only scene where Yeong-min interacts with the other family members, making that whole subplot feel more like a dry run for Yoon Doo-joon's potential as a leading man in a romantic comedy than anything to do with the rest of the movie.

"[HanCinema's Film Review] "Marrying the Mafia 5 - Return of the Family""
by HanCinema is licensed under a Creative Commons Attribution-Share Alike 3.0 Unported License.