[HanCinema's Film Review] Fatherly Forces Collide in "I am a Dad" 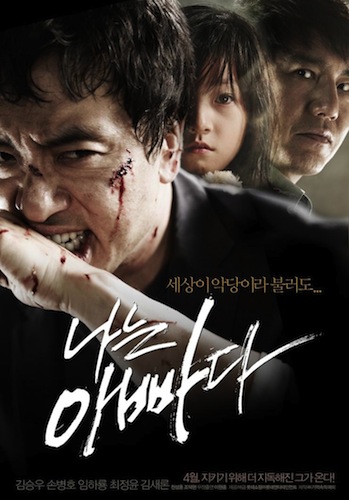 Also Try: "The Man From Nowhere" & "Man of Vendetta

Kim Seung-woo and Son Byung-ho go at each other in this hard-hitting action drama; in the end leaving just one of them standing, on a roof, doing magic? That's right, nothing, not even this huge spoiler could prepare you for the film's catastrophically dismal final moments. Directors Jeon Man-bae ("The Romantic President") and Lee Se-yeong-II failed to impress the Korean public when the film was released early last year; with "I Am a Dad" failed to reach even 200,000 admissions. It was an incredible failure on all levels, but what did it all fall to pieces? Surprisingly, it's the worst film I'll still have to end up recommending.

Jong-sik (Kim Seung-woo) is a hard and dirty cop on a personal mission to save his daughter's life. She needs a new heart after a tragic (and I am going to use this word a lot in my discussion of this film) incident with one of his past cases-and now she's all he has left. He breaks and bends the rules, and cares little about due process or justice. Complementary to Jong-sik is Sang-man (Son Byung-ho), a family man who has the astronomical bad luck of being caught red handed, with a knife, standing over a dead man he owes money to. His pleas of innocence are automatically rejected by the stern and reckless Jong-sik; and by the time his innocence is finally uncovered, his family has already suffered the full extent of their families' collective pain over the matter. Sang-man then discards his 'family values' as his family's lives are threatened, and submerges himself in a deep and self-destructive quest to avenge the destruction of his family.

These are two patriarchs willing to put their own lives on the line for the sake of their families. Their characters are painted with such crispness and clarity that it more than flirts with being over-salted and cliché. However in doing so the film leaves no room for interpretation (a fact they awkwardly try to circumvent later), as these characters are as reliable as the cardinal points. Opposites, for example, plague the screen as the film attempts to lure you way from the excellent characterisations already in place, a task designed to act as a distraction to the decisions we know these character's will ultimately make. These are both firm 'family men', but there attitudes are more like two sides to the same coin, but there core values are a constant as they both strive to protect what they hold dearest.

Similarly, even the support cast was coloured with deft and nimble fingertips and, at times nicely mirrored the main protagonists themselves. Some of these great inclusions were the masochistic nurse who gets beaten, sworn at, and abandoned repeatedly. The crazy and unstable prison mate who suddenly appears to cause trouble and mayhem; And Jong-sik's partner, who is perhaps the single greatest Korean policeman I have ever seen in a Korean film. He is polite, never seems prone to violence, follows the rules and values his position. As you can see the characters in "I Am a Dad" are, actually, not really where the fell devastatingly short, in fact they were its biggest strength.

This is where things get a little tricky to pin down. "I Am a Dad" seems to contain all the right narrative events and actions (although terrible mishandled and abused); the film even shines, at moments, through its suturing of some pretty unbelievable jumps in the editing as slick cuts and transitions really help condense critical moments and heighten the early tensions. The pieces were all there, and events seemed to all pull together in the end (except that poor nurse's story) as the film cleverly played within its own repeated understandings of 'cause-and-effect'. Some of its narrative hinges were quite smooth, almost seamless; however keep your eye on the clock because the film's latter half will keep the thrills coming, whether you want them to or not. A huge shame, because I found film's set-up and exciting Act I intriguing with its emphasis on the journey of these two unstoppable fatherly forces. The connection/similarities between the two fathers and their families is there to be made, but the directors and writers seemed utterly convinced to try use this to ' trick ' the audience as much as possible; releasing a flock of red-herrings that continued to bombard the screen and taunt the audience's intelligence with cheap tricks and frustrating TV-style melodramatics.

"I Am a Dad" is an unprecedented ride between brilliance and tragedy. I almost, foolishly and only for but a brief moment, saw hazy parallels to "I Saw the Devil" in terms of the clash of forces at play within the film. The film does such a great job of characterising the conflict, but it's ultimately heavy-handed and suffocating. It's an action drama that was probably butchered by the pen long before it failed to impress in the theatre. Strangely though all is not all doom and gloom here, as the action and characters really do make this the worst film I am still willing to recommend.

* Christopher is a film writer and a graduate arts student at the University of Cape Town in South Africa. He lived and worked in South Korea for four years and there he channeled his passion for film into the Korean cinema scene. Driven by his rampant cinephilic needs and Korea's vibrant cinema, Chris now enjoys watching Korean films and writing about what he thinks of them.