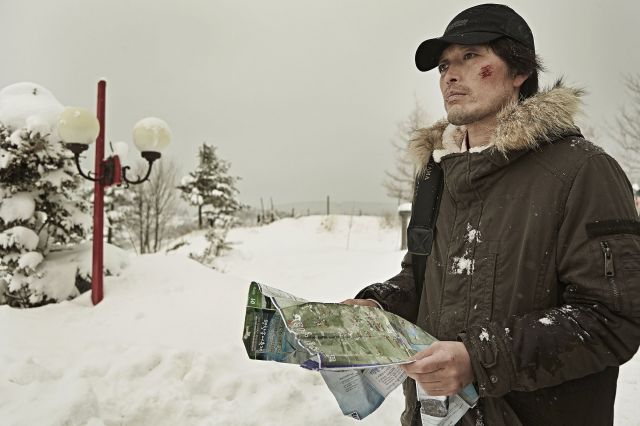 In last year's "Fatal", a sharp change in the action arises when a character asks, what about those criminals who redeem themselves? Their victims have to remain living in suffering trauma as a result of the damage done to them, yet a redeemed criminal can just go about their life as normal. It's obviously the Christian thing to do to forgive people for such actions- but how can a victim accept that in the moment, dealing with a perpetrator who, provided that he's not caught, will never atone, and laugh derisively at the idea that he should?

That's the central moral question facing Sang-hyeon (played by Jung Jae-young), a man who loses his daughter in horrible circumstances for alarmingly blase reasons. Constantly throughout the film Sang-hyeon screams why, why, and never gets an answer. He never gets an answer because there is no answer. It was a random, senseless crime- the latest in a series of random, senseless crimes that only happened because no one had the temerity to say "this is morally wrong".

Truthfully, I was apprehensive entering "Broken". This is the kind of story set-up typically designed to indict monstrously evil fantasy monsters, yet the perpetrators' simplistic thought process only manages to underscore the fact that they're children. They're victims too- or potential victims, with their own grieving parents. And how are we supposed to respond to that?

Don't expect the film to give you any answer to that question. In the final epilogue, one character offers up his solution to see that this won't happen again. It's not much of an answer. At best, he's just telling us- we can't forget, and we can't let other people forget. We're not politicians, we're not social crusaders. All we can do is stare down the few instances of evil that we come into contact with in our daily life- and hope they stay down.

The result is a remarkably down to earth film. Director Lee Jeong-ho spent the last three years carefully crafting "Broken" and the effort shows. This movie speaks to the person that has no power to change the world for the better. Sang-hyeon, far from being the unstoppable vengeful father seen in more mainstream Western films, resorts to his rampage out of a core feeling of helpless impotence. He knows this isn't the answer, and he knows he should just give up- and look forward to what? The rehabilitation of monsters?

What makes "Broken" such an effectively tense, heart-pounding thriller is the fact that its argument is a powerful one. Each scene is frightening, not just because of the possibility of physical confrontation, but also the overwhelming dread of realizing that no action can erase pain the crimes already committed. In all likelihood it will just make things worse. This means nothing to the man who has already lost everything. It's that jealousy that fuels Sang-hyeon's rage and gives the film such emotional resonance- the possibility that others will be able to feel life once more, when neither he nor his daughter had done anything to warrant losing theirs.

This review was written by William Schwartz as a part of HanCinema's PiFan (Puchon International Fantastic Film Festival) coverage.

"Broken" is directed by Lee Jeong-ho and features Jung Jae-young and Lee Sung-min.