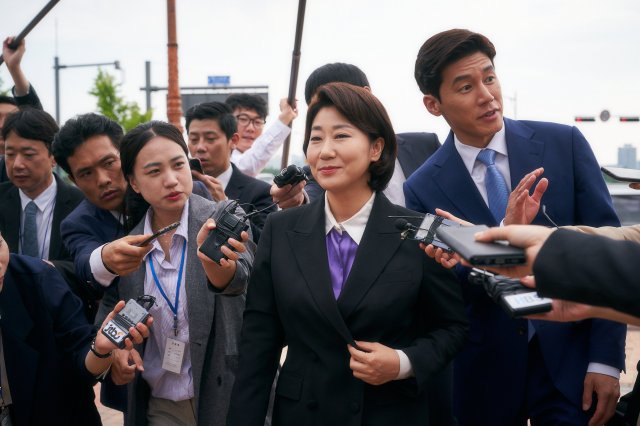 The opening origin myth of congresswoman Sang-sook (played by Ra Mi-ran) is that she nobly got into politics to help her dying grandmother Ok-hee (played by Na Moon-hee). This story is, unsurprisingly, not entirely truthful, but Ra Mi-ran is quite understated in her first contrast of the real Sang-sook with the fake one. Sang-sook is critical of some very weird, specific aspects in the advertisement, pretends to care about the opinions of her staff, but diplomatically makes her dictates seem like a team decision.

Sang-sook is, in short, a surprisingly capable politician. She's good at making us like her, even as it becomes obvious that we probably shouldn't. And in a truly inspired moment of sadistic screenwriting, most of "An Honest Candidate" forces Sang-sook to use her powers of passionate political diplomacy in an utterly hopeless situation. She has to admit to being a terrible person to everyone she meets.

The basic concept of "An Honest Candidate" comes from the Brazilian film of the same title. The movies don't share much else in common. There isn't exactly much that can be easily translated from Brazilian to South Korean politics save for the universal knowledge that politicians lie all the time. We don't want them to lie, although curiously, the nonspecific politics of this allegedly political comedy never get quite so far as explaining how exactly Sang-sook can redeem herself morally and ethically.

This makes the last act of the movie awkward. Even as we like Sang-sook, we know as real-life constituents that she should really not be in a power position. In the short term it's glorious watching Sang-sook struggle to try and solve problems of her own making when she can no longer even try to be her own spin doctor. But at the end of the day, there's just no way to interpret Sang-sook as noble. At best she's self-aware enough to know that she's made bad life choices.

Hence it's relieving that most of the comedy in "An Honest Candidate" is of the comeuppance variety. We're watching all of these characters, Sang-sook chief among them, do battle with their own sense of image and continually be embarrassed by how goofy and awkward they really are. I loved all the subtle details in "An Honest Candidate", like how Sang-sook and her husband Hee-cheol (played by Kim Mu-yeol) have expensive hobbies which they enjoy in a decidedly non-elegant way. They're boors and don't even know it, and have to find out the hard way.

Even beyond this aspect "An Honest Candidate" goes far just on bickering and banter alone. Ok-hee is great as the bitter, mean grandmother who can't reconcile the Sang-sook of today with the kind-hearted child of her past. It's great fun just watching everybody else do everything they can to keep their tempers in check, knowing that serious leaders never get angry. But then, Sang-sook herself is predictably more likable when she's being honest- which I suppose is how she eventually, if awkwardly, manages to become the hero rather than the villain of the movie.