[HanCinema's Drama Review] "Why Her?" Episode 8 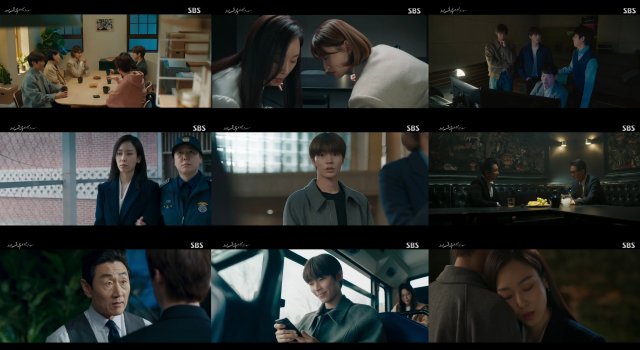 Mi-rim (played by Lee Joo-woo) is Soo-jae's most prominent ally at TK Law Firm. Despite this, from the very first episode, Mi-rim has been shown to be self-interested, refusing to give a clear endorsement for CEO. With Soo-jae now under suspicion of murdering Seok-pal, a major ally of Chairman Choi and the presumed murderer of bar hostess So-yeong, Mi-rim is the natural choice for Soo-jae's attorney. Yet Mi-rim asks Soo-jae a leading question, which the police seem to be listening in on. And then...

...Well, it turns out that Mi-rim is on Soo-jae's side after all. It's just hard to tell, because the police had earlier tried to get Soo-jae herself to provoke Soo-jae into getting an incriminating statement out of Ji-yeong, So-yeong's sister. There are a lot of layers at play in "Why Her?" which is often quite deliberately ambiguous about which bit of cynical worldbuilding is relevant at any given moment. About the only constant is Chan's undying love and loyalty to Soo-jae.

Oddly enough that storyline is rendered more convincing by Chan's relatively little screentime here. The emphasis is helped by a late appearance by Joon-hee, Soo-jae's only friend on a personal level. We get their backstory, which basically amounts to both of them being kind of mean and unapproachable to due to their hypercompetence. Yet despite this, recall that Joon-hee is happily married to another doctor, played by Kwon Sang-woo in cameo, with a very different temperament.

That Joon-hee could find love despite this dissimilarity suggests that Soo-jae, too, could find love, despite her apparent determination to wallow in misery. This is a cheerful note of optimism in an otherwise discouraging storyline, which sees Soo-jae jailed for a crime she didn't commit. And strictly speaking, we still can't rule Mi-rim out as a turncoat. After all, Chairman Choi only ever expected Soo-jae's imprisonment to be temporary, and breaking news intervenes on Soo-jae's behalf even after Mi-rim presents decisive evidence.

"Why Her?" remains difficult enough to follow that it's easy to see why the legal drama's ratings have plateaued, with the eighth episode domestically hitting 9.2%. But the sheer depth of the mystery remains impressive, as does the dedication to past continuity. I liked how the detective responsible for arresting Soo-jae responded to the arrival of new evidence. Soo-jae's threats carry real bite- and her contingency plans can't be ignored, whatever Chairman Choi's own schemes may be.