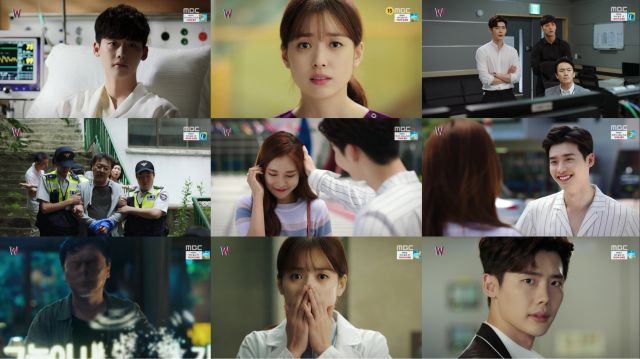 My main takeaway from "W" at this point is that good writing is hard. Much like the last time Cheol tried to "solve" the problems created by Seong-woo's inability to finish the story in a convincing, compelling fashion, this time too we're left with a resolution that's just kind of...blech. In a lot of ways this is a problem with the serial detective format in general. If the main character devotes all of his energy to solving episodic crimes with no progression in the main plot, it's pretty inevitable that the final personal backstory case is going to be a letdown.

...But once again, Seong-woo's creations get the best of him. The result is a final case that quickly spins completely out of control. It's both dynamic storytelling and actually surprisingly frightening. Recall that from Cheol's vantage point, everyone involved with the "W" broadcast is a real person who he probably knows on a first name basis. The announcer in particular has provided most of the exposition.

Given what happens to all of them, "W" is left with a pretty powerful sadistic streak here. Combined with the strong storytelling, this created a rather unexpected effect to me- I actually felt really guilty. I'd spent most of this episode thinking about how, barring some incredible twist, writer Song Jae-jeong was practically admitting to us that she had no idea where to take the story from here. Well as it turns out, she did, and now people are dead.

Granted these are not real people. "W" is a work of fiction. Yet the way Yeon-joo is obsessed with Cheol is a constant dark reminder of the fact that we, as fans, tend to think of fictional characters as being like real people. These emotions, while admittedly silly, are most definitely real, and there's something deeply discomforting about the way we want horrible things to happen to these "people" that we love simply because it will be more entertaining.

Come to think of it I'm still not at all sure where "W" is supposed to after this. At this point it looks like the emphasis is going to be less on the meta-subtext and more on actually seeing what Cheol's world looks like from Cheol's point of view- a hard-nailed detective thriller where the chief antagonist still possesses all the bad writing superpowers, just with a face now. Incidentally, kudos to the makeup department for its fairly disturbing moment of body horror.