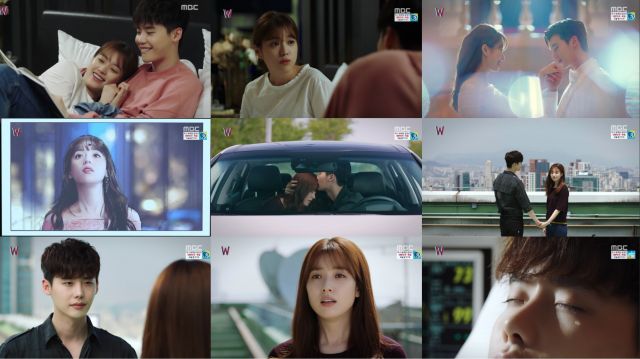 The shrouded static villain is weirdly sympathetic in a way, because its entire existence is the arbitrary creation of a Godlike figure who never bothered to impart any meaningful personality traits onto his creation. I can't help but see this character as being the personification of fan rage. Sure, we've only been watching "W" for seven episodes, but the in-universe fanbase has been waiting years only to be suddenly told that plot arc isn't going to end because now the story's a romance.

Which in itself brings up all sorts of other uncomfortable questions. Unlike the shrouded static villain, So-hee is a character with clearly defined personality and motivation. Even if So-hee never actually had a romance with Cheol, her existence too has largely been to provide him with logistical support for the sake of solving crimes. If solving crimes is not something that Cheol does anymore, why does So-hee exist? Realistically speaking, is it even possible for her to exist if everything in "W" takes place from Cheol's vantage point?

These metaphysical questions are all kinds of messed up. Even if Seong-moo literally created the "W" universe, the fact that everything in this world revolves around Cheol makes Cheol the more metaphorical God, and the responsibility is clearly too much for him. Imagine if you found out that the universe literally revolved around you, and that real live people disappear if you go too long without observing them. Could you handle it?

When all these factors are taken into account it increasingly seems like Yeon-joo is the real villain of "W". By refusing to let the world end Yeon-joo has forced Cheol into a series of impossible situations and put multiple lives at risk, including her own. It's from this vantage point that we sail into the cliffhanger, where Cheol is forced to put into action the only plan that could possibly make the situation less miserable.

I don't know where "W" is supposed to go from here. Yeon-joo's romantic fixation on Cheol was already starting to get a little creepy, what with his literally being the personification of what Yeon-joo considers the ideal man to be. Yeon-joo is like a far-gone fangirl who practically needs an intervention in order to separate from her unhealthy obsession with a fictional character. That this fictional character happens to be real in the internal context of "W" is, I think, more a dramatic flourish than anything else.