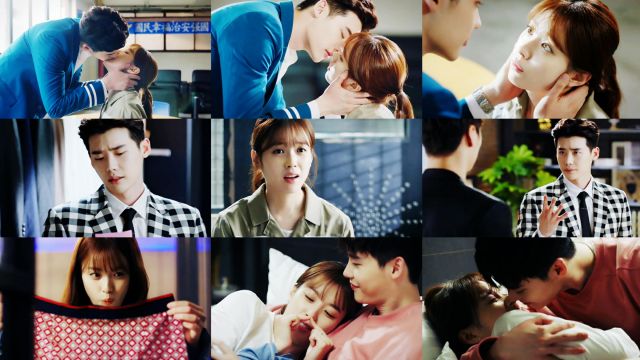 A disproportionate amount of energy in "W" is spent on writer Song Jae-jeong justifying her own story. Well, technically Yeon-joo is the one rationalizing why Cheol's story needs to continue, but the script in "W" constantly feels like Song Jae-jeong laying out her own scriptwriting process bare for us all to see. And yes, Kang Cho-yun is in fact a real person who really did compete at the Olympics once upon a time. Wherever Kang Cho-yun is today, I imagine she's rather bewildered that her name has come up in pop culture now all of a sudden.

Little touches like this that really conflate the boundary between writer and main character in "W". It helps that any time Yeon-joo has to justify herself to Cheol, she always ends up getting hit pretty hard. It's actually quite difficult to accept the existence of "W" except conceptually as a bit of fiction ostensibly intended to entertain the masses, but in reality as the expression of Song Jae-jeong's own ideals toward life and love.

Perhaps the biggest issue I have with "W" is that it does such a good job explaining what it's doing that it often feels like there's not very much I can add to the topic. For a sense of perspective, one plot point quite literally involves one of those books that's just pictures of a couple doing lots of cute things together. A book that, like Kang Cho-yun, I'm sure is completely real and inspired Song Jae-jeong to come up with this plot arc in the first place.

The only wild card remaining is how apparently the villain of "W" still exists, and is evidently unsatisfied with Yeon-joo's contrived attempt to keep the story going. That much isn't really a spoiler- it's actually one of the few pacing missteps in "W". A scene from last episode's preview shows up in this episode's preview, and it's quite some time before the villain makes its presence felt in any case.

In the meantime, we're just distracted by Yeon-joo's explanations and Cheol's as usual difficult to anticipate yet all too real reactions to Yeon-joo's explanations. It figures, for example, that while Cheol is almost completely impervious to Yeon-joo's logic he's quite touched by her emotional reactions. Any writer who's had to answer questions from a fan audience has likely felt the same way. Which is further irony, of course, since in the context of the scene Yeon-joo is the author- not Cheol.