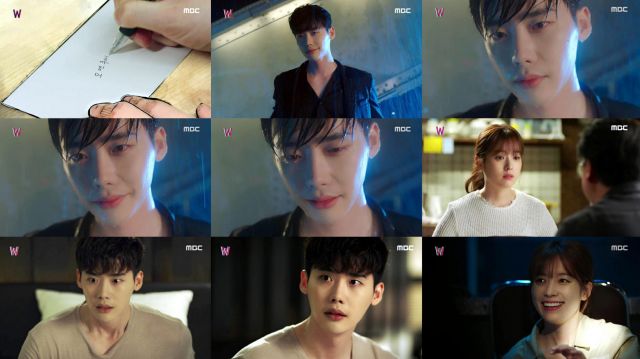 Recent events have led "W" to a bit of an impasse. Cheol figures out a way to "solve" all the problems mentioned by Seong-moo, but as expected this solution is completely unsatisfying from a narrative standpoint. It also brings up all sorts of weird issues with quantum mechanics and zen philosophy. Can Cheol really "die" if he's not alive in the first place? To what extent does Cheol even exist if his actions are defined by the "Real" people who observe him?

Ultimately it's Yeon-joo who answers these questions by deciding that since Cheol's plan to "end" the story is narratively unsatisfying it is up to her, the fan, to find a way to insure that his adventures continue. The result is a cliffhanger that is both highly contrived and exceptionally weird. It's not at all clear to me the extent to which Cheol is going to accept this turn of events, although it's not like Cheol has been a particularly easy character to predict anyway.

What makes "W" more than a little nuts is that writer Song Jae-jeong is constantly baiting us into trying to make sense of the plot while knowing full well this is probably completely impossible. The meta-subtext is especially thick any time we see people in the "Real" world react to Cheol's increasingly bizarre adventures. They're assuming that this is all some sort of master plan on Seong-woo's part, unaware of the fact that the story is pretty much being made up as it goes along at this point.

Is Song Jae-jeong pulling the same trick on us? Is she just coming up with all these new plot twists at random? That thought becomes unavoidable as we're introduced to a new potential villain who is definitely not connected with Seong-woo, although it may be connected to Yeon-joo, just not consciously. But why does this entity exist at all, is the real question. Is it just to satisfy our desire for the story to keep going or is there actually a heretofore more complicated layer to the plot?

The main boon I can grant "W" is that whatever is going on here, it's pretty obvious that we're supposed to be rampantly speculating about every possible plot point. "W" is not at all like a normal drama, where most speculation is just fan projection. "W" is the very existential concept of fan speculation boiled down into narrative form. It's why the drama is perplexing yet not in a bad way.