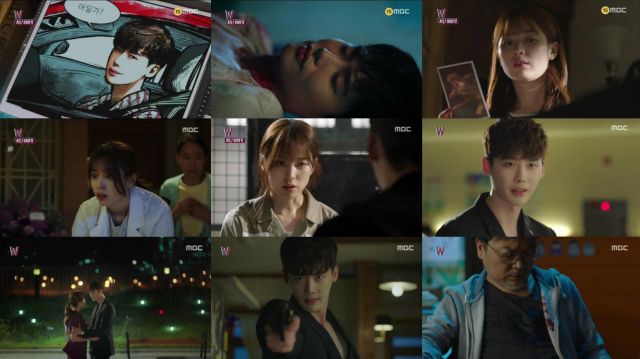 There's a perspective shift from Yeon-joo to Cheol here, which ends up explaining a lot of details about the premise of "W" that until now have been unclear. First of all, we know what the title "W" refers to internally now, and have a better grasp of the sequence of events that led Cheol from tragic backstory to genius investigator. But the more important shift is Cheol's emotional state. By reading the "W" comic book, Cheol can see his entire life pass in front of him.

This is a pretty messed up psychological state to be him. I actually felt really guilty for a lot of "W", because so much of this episode is simply pointing out that it's kind of messed up how people use fiction to vicariously identify with the pain of other people. Even granting that Cheol is a fictional character, there are actual real people in the world who have suffered the loss of loved ones in horrible circumstances. Portraying their pain for the sake of our own amusement is pretty cold.

On a less discouraging note, I'm not convinced Cheol is actually a fictional character. Yes, the supporting evidence does seem to make any other interpretation at this point unlikely- but not impossible. Everything insight Seong-moo has regarding Cheol that seems to be proof of the man's artifical nature could just as easily be seen as insight to his personality that would be expected from someone who's been in intimate contact with the guy for so long.

The same can be said for Cheol's deductions into Seong-moo's character. Consider this. We make personal judgments based on people we don't actually know all the time, just based on extant material transmitted through mass media. As an example, if you read my reviews you probably have opinions to my personality and how I tick, and several of these opinions are probably true. But they're true only to the extent you understand my reviews. There is more to my existence and personality than just my reviews.

Cheol himself is the proof of concept for all this, since time and again the man defies expectations of what he "should" do and instead just does what he wants to do. Seong-moo and Yeon-joo are actually much more restricted characters than Cheol because they think in story logic and Cheol does not, even though ostensibly Seong-moo and Yeon-joo are characters in the real world. It's all...very complicated, isn't it? And as usual, the cliffhanger only makes the situation worse.