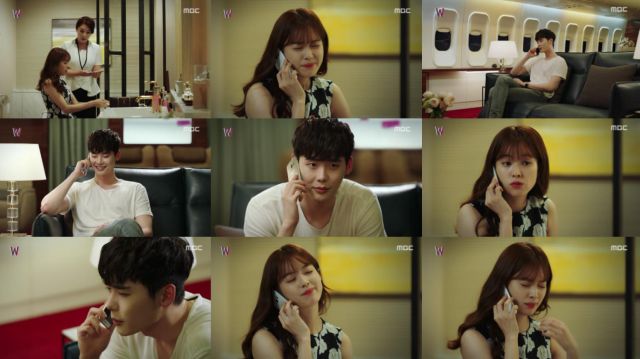 One of the factors that makes Cheol such a fascinating protagonist is that he is legitimately really smart. Even though the guy's a character in a genre thriller comic, Cheol thinks like an actual real person. When crazy bizarre contrivances jump out of nowhere for the sole apparent purpose of killing him, Cheol merely notes that there is no such thing as coincidence. And he's right, even if the real answer is much stranger than Cheol could have ever possibly imagined.

Or anyone else for that matter. Let's look at So-hee (played by Jung Yoo-jin). She breaks ranks with Cheol here on the Yeon-joo issue less out of spite and more because her interpretation of the situation is indisputably far more logical. While Cheol is fairly cold with So-hee, at the same time he can't really explain why she's wrong, because Cheol's own incomplete theory is so completely bonkers that So-hee would simply think the stress of all these attempted murders is getting to him.

Yet for all this Cheol is still willing to take advantage of an unwanted situation to try and bully Yeon-joo for answers. In short, Cheol is an incredibly complex character, and that's why Yeon-joo's descriptions are as ironic as they are unbelievable. A person says "comic book character" and the image that pops up to mind is something very two-dimensional and easily defined. Yet time and again Cheol defies Yeon-joo, the readers, and even his creator in terms of unpredictable behavior.

Cheol's entire world, for that matter, is so impossibly well-defined that it's hard to really think of it as being a work of fiction. Look at the sheer attention to detail in terms of character reasoning, politics, and logistics. Cheol's world is just as "Real" as Yeon-joo's, if not moreso considering how much we've seen of the two in relation to one another. Which one is the more artifical construction- the place with goofy doctors or the one where the police are only mildly agitated with an obviously uncooperative suspect?

But never mind our reactions to this episode- how are the real world comic fans going to react to this? As the plot progresses and the comic world has to react to how Yeon-joo appears and disappears out of nowhere, the "W" comic has to discuss its own genre conventions in a way that completely breaks suspension of disbelief. And the cliffhanger to this episode of the "W" drama is only going to put a more insane spin on it.