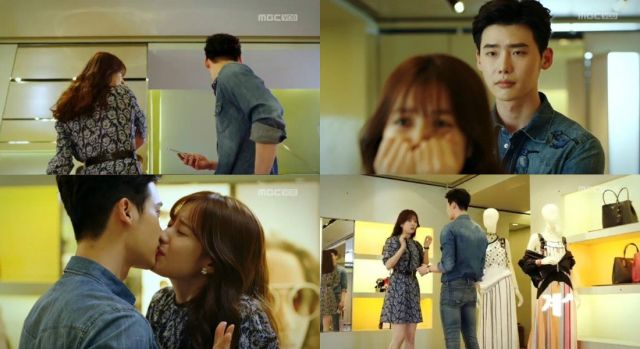 It would appear that on top of her other characteristics Yeon-joo is also a drama critic. Go figure. Well, in all fairness practically every real-life character in "W" has some sort of strong opinion about how fictional stories should proceed. And Seong-moo, in typical famous author fashion, arrogantly dismisses any notion that there is a "correct" way to write a story. He wants to kill Cheol and by golly, he's going to succeed no matter how obviously contrived the process is.

Seong-moo is the big mystery in "W". Note how he is consistently very curiously blasé as to the revelation that his webtoon has somehow been drawing itself, and is more irritated at Yeon-joo's interfering with his story than he is surprised that she has this apparently supernatural power at all. Seong-moo's curmudgeonly attitude in general is weirdly charming. It's rare to see fictional authors be presented as such jerks, mostly because the real-life authors who write these stories try to make people who share their profession seem sympathetic.

As for Yeon-joo, she remains completely bewildered. I like how Yeon-joo keeps trying to think in story logic in Cheol's world even though these are all real people who she can see and feel. Yeon-joo is having quite a bit of difficulty explaining who she is or why she knows the things that she does. It was a fairly nice touch how we see that Cheol's world is explicitly based off of the real one. Or at least, the parts of it Seong-moo sees on a regular basis.

...Or does he? Writer Song Jae-jeong makes a point of giving us more questions than answers, and a big part of the drama's "whaaat?" factor is that the few answers we get just lead to increasingly more elaborate questions. Given Seong-moo's godlike power over the webtoon, it does not seem as if Cheol can put up any sort of credible fight against him. Yet come the cliffhanger, that is exactly what Cheol has done, through a closing line that's even more ominous than it looks.

Consider, for example, the multiple ways Cheol's thought process can be interpreted. Is he referring to Yeon-joo? Seong-moo? The fictional killer? The fictional audience? The real-life audience? The real-life production team? Cheol is obviously suspicious about his situation in life in ways that go beyond the knowledge we would expect him to have as the protagonist of a mere genre thriller. How much he truly suspects is, as of yet, unknown.