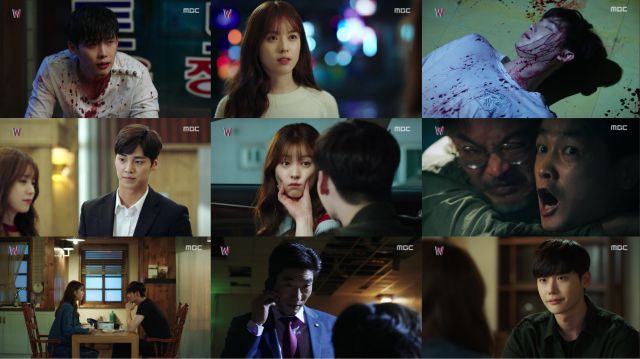 Even though there's not all that much physical violence this episode the morbidity is pretty strong. As the main characters find themselves with increasingly little ability to change the webtoon world they become more and more resigned to fate. Well, Cheol and Seong-moo do anyway. Yeon-joo, having largely managed to recover from her near fatal bullet wound, is determined to keep trying to make an effort to shoot for a happy ending.

As usual this begs questions as to what exactly a happy ending can be for a fictional character, since everything we've seen up until now has suggested that once the story's over the whole word just sort of stops, permanently. The emphasis is less on the happy and more on the ending. Whatever direction the story ends up taking, come next episode, we will not see any of these characters ever again, and any sort of positive afterword will exist only in our imaginations.

The fictional atmosphere is always fairly unavoidable in "W". Note how the cliffhanger closes out, not with any new information about a protagonist we care about, but a gimmicky one note character who sees correctly that however wonderful the final chapter of "W" may be, it must be approached as a mere story. Whatever expectations the final episode may or may not fulfill, ultimately, it will only really affect our mornings on that day and eventually be forgotten about.

While the meta-analysis in "W" has generally been engaging, the explicit way this has shaped the story really did move this episode to explicitly depressing undertones for me. It's not that I'm sad the drama is going to end, so much as the drama's more utilitarian componenets are now all too obvious. Observe how Cheol-ho (played by Park Won-sang) has chosen to use this meta-knowledge to further his own narrow ambitions rather than think in terms of the fictional world he inhabits.