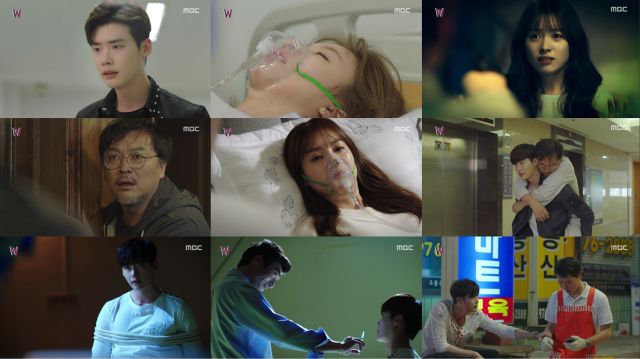 At this point "W" is in a stage of kind of being an epilogue but not quite. Yeon-joo is in the hospital, and everyone is of course worrying about how that's going to work out. However, another more nagging question yet remains. I'm not referring to the worldbuilding aspect of "W", but rather how all these silly webtoon antics have consistently resulted in people actually getting killed. Watching characters seriously react to the prospect of a loved one dying puts all of this in sharp perspective.

Let's be honest here, though. To date all of the casualties have been irrelevant unnamed characters, so of course we don't pay that much attention when one of them dies compared to Yeon-joo. Remember the police officer last time around that was straight up garroted? He had a family, just like Yeon-joo does. Yet in context that was just another bump on the murderer thriller road, an obstacle to the happy ending which everyone in this drama is chasing.

But who's really chasing that happy ending anyway? Them or us? Increasingly that line feels blurred to me. Strictly speaking it's blurred in practically every drama, since the process of watching dramas is really about us, the viewer, rather than the fictional character. It's uncanny, though, how time and again "W" is able to use its framing device to remind us of the more fantastical aspects of narrative fiction and storytelling without ever managing to break the willing suspension of disbelief.

Relatively calm episodes like this do a lot to slow time down and take matters into full perspective. Unfortunately I'm as yet rather ambivalent to what the full perspective might be at this point. Increasingly Cheol seems less like a character and more a hyper-competent cipher, largely in consequence of how "W" has gone from wondering how he thinks to just straight up laying down the facts. He loves Yeon-joo, and even if Cheol was practically pre-programmed to do so, does that make this love any less real?

We could ask the same question of her parents, after all, considering that Yeon-joo is their creation. In more ways than just the literal. Has her obsession with the webtoon world always been, in the end, just a manifestation of her own lifelong insecurities from having watched her parents be in an unhappy marriage? And to what extent does she represent our desperation, for those who have seen that similar situation? It's...unsettling stuff, you know?