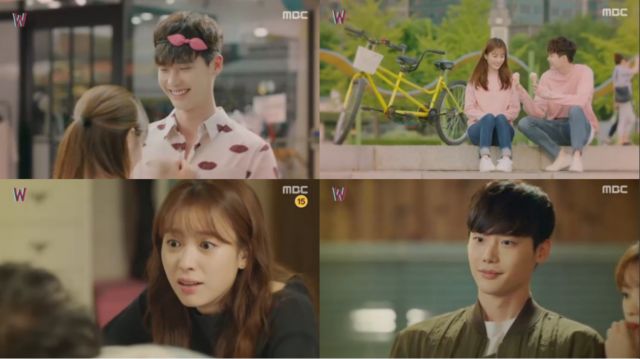 Cheol's two reactions to the discovery that his world is a webtoon are completely opposite of one another. This is entirely a matter of context. The first Cheol discovered the existence of the "Real" world through standard deductions as a part of his normal everyday work, and the revelation destroyed him. This Cheol hit absolute rock bottom, to the point of contemplating suicide- so the existence of a "Real" world to him was a form of salvation.

This is unsettling mainly because it's a reminder of just how arbitrary major life moments can be, and how the backdrop can completely change how we react to them. Just last week I went from fury and despair to sudden cheerfulness simply through the receipt of some unexpected good news. In the same way, Cheol has gone from dark worry about his lifelong friends to mostly being OK with them thinking that he's dead.

The main commonality with both of Cheol's stories is Yeon-joo. And you know, I don't care how adorable their matching shirts and double bike happen to be, it is still weirdly creepy that Yeon-joo is in a romantic relationship with her literal dream man. It seems like this has to be some sort of commentary about the way members of fandoms get overly obsessed with fictional characters- but that would require this be Yeon-joo's fantasy somehow.

And that much still can't entirely be the case, as the internal plot of "W" is still finding ways to lurch forward. What's odd about the backfiring this time is that to a certain extent, I'm actually not totally sympathetic with Cheol. He's abusing comic writing powers to force certain characters to act in a specific evil way. To Cheol, these aren't characters, though. They're real-life people he has had actual conversations with, and he is sacrificing them for the sake of a happy ending.

This, too, brings up all sorts of questions about what a "Happy Ending" really is. Easy as it is to hate the obviously evil villain, from the very beginning he existed for the sole purpose of making Cheol look good- first as a tragic protagonist, then as a mighty crime-solving hero. The final showdown too, seems deliberately manipulated for this purpose, for maximum drama even if logically speaking Cheol should only have a fifty percent chance of winning. Such is the fate, evidently, of thinking you have free will.