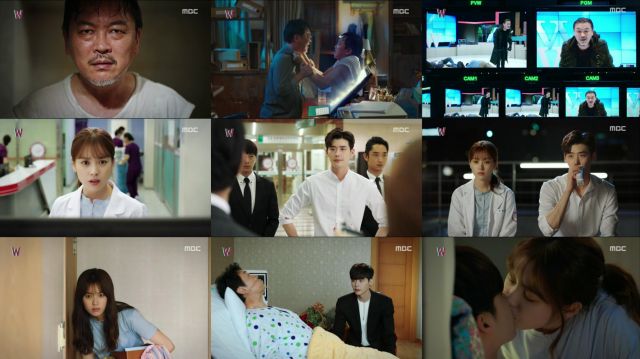 The production team in "W" is able to get quite a bit of mileage out of just looking at scenes from a new angle. It helps that the most dynamic scenes in "W" are so crazy and out there they're no less shocking the second time around. Even so, those of you wondering just how it is that the villain got so powerful there's a surprisingly convincing logistical explanation for that. It's little wonder that we didn't think of it, since Seong-moo forgot too and he's the one who writes this stuff.

But Seong-moo is a lost cause at this point, what with the lack of agency or face, which leaves Yeon-joo as the hero, and she spends almost the entire episode resisting that role. For good reason- last time Yeon-joo tried to solve problems in "W", everything just got worse. It's fairly clear that she's trying to avoid a repeat of that same situation by not getting involved again.

Yeon-joo's refusal to be helpful is, at times, rather comical. Observe how almost all of her energy is dedicated to living like a hobo. I also found it rather amusing that in the supposedly "fake" world of "W", hospital staff are suspicious of people they've never seen before even in the middle of a medical emergency. Contrast that with practically any other drama where the villain can dole out poisoned donuts, hire freelance clowns, or use magic shadow powers on coma patients without anyone ever noticing.

Even though "W" has an extremely complicated conceit the tension is surprisingly down to earth. Consider how it's unclear whether the villain expects or even wants to defeat Cheol. No, the bad guy's chief concern here is to tell the best possible story. The recurring metaphor of the villain being Seong-moo's "son" is a fairly apt one. Their actions are always in service of the same point- suffering in the name of story, with we the viewers, being the chief beneficiary.

"W" is a guilty pleasure, not in the way that phrase is normally used, but in the sense that the drama puts Cheol through the ringer for our own cheap amusement. Yeon-joo struggles with doing the right thing precisely because she has realized that it is wrong to use Cheol like a toy, yet however the situation breaks down, Cheol is merely a plaything in somehow else's hands. That's pretty existentially messed up, yet it's unclear whether Cheol can succeed in his current ignorant state of mind.