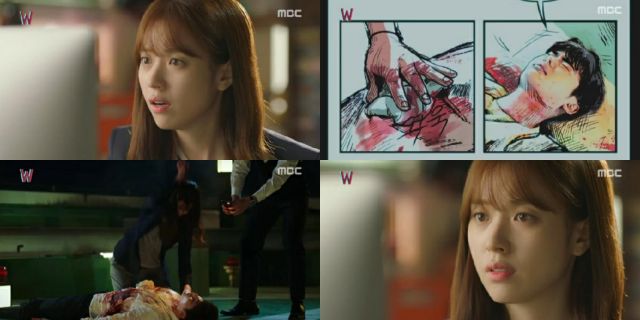 Cheol (played by Lee Jong-suk) is an Olympic level marksman who is framed for a horrible crime, wallowing away in despair before finally becoming determined to locate the true perpetrator. Cheol is also a fictional character in a webtoon by Seong-moo (played by Kim Eui-sung), who is also the father of Yeon-joo (played by Han Hyo-joo), a clumsy doctor who juggles medical responsibilities with an active social position as the daughter of a famous webtoon artist. Matters take a turn for the weird when Yeon-joo is left alone with a manuscript that appears to clumsily kill Cheol off.

On one end "W" is a deadly straight-faced high-concept wrongly accused man storyline. There's no real sense of self-parody in the scenes that take place in Cheol's world. It's exactly the same kind of plot that could feature in either a daytime revenge melodrama or a high-concept adult comic book. Incidentally, until watching "W" I had not noticed how much those two genres shared in common, considering how they're aimed at two completely different audiences.

That kind of irony is the main humor that pervades "W". Yeon-joo is completely bewildered by the turn of events and just sort of stands nearby with a dumb incredulous look on her face. When Yeon-joo is forced to solve a medical emergency using a trope that is common in fiction yet obviously ridiculous to a real-life doctor, she resists until finally only reluctantly following the genre convention.

Cheol's reaction to having a person from the "Real" world enter his own proves to be equally telling- it's almost religious in tone, and for good reason. From Cheol's perspective, Seong-moo is God. From our perspective Seong-moo is also the person responsible for Cheol's horrible position in life because he's the one who murdered Cheol's family...by writing a story about it. And if the look on Seong-moo's face when drawing the decisive panel is any indication, Seong-moo is about out of patience with Cheol too.

If nothing else, the plot is certainly madcap and innovative. As of yet I can't tell whether the story in "W" is genius or just creativity disguised as genius. But if nothing else, it definitely looks cool. Check out the nighttime cinematography, the pitter-patter of hard rain, or the seamless transitions between live action scene and webtoon comic panels. Director Jeong Dae-yoon has certainly made the first episode look stylish enough-let's see if he can keep it up.