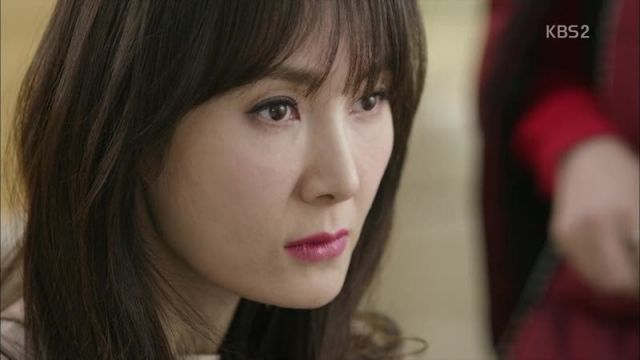 The setup stage of "Unkind Women" is winding down and we're getting to the meat and potatoes of the story. We're seeing behind the curtain and discovering what makes these women tick: the pain, the stories, the relationships.

First, I'll lay down what doesn't please me in order to get it out of the way. For the most part, I find this a charming drama with relatable characters and materials. However, I dislike that Kim Cheol-hee (Lee Soon-jae) is still alive and suffering from long-term amnesia. It gives Mo-ran a secret to keep and Soon-ok more pain to suffer in the future, but it also takes away from the forgiveness Soon-ok is growing ready to give to Mo-ran. Learning to forgive is a great character builder and plot piece and I wish the drama had left it at that. But maybe I'll like the addition of the supposedly-dead cheating father/husband who really isn't dead but has amnesia. I also dislike how Doo-jin and Ma-ri were thrown together because it seems contrived in comparison to how Roo-oh and Ma-ri meet. Again, this could be a good thing. It's just strangely timed.

Speaking of Ma-ri and her two potential suitors, it's difficult to tell which man the drama intends for the young woman - I like it! It's usually quite obvious from episode one who the lady ends up with. In this case, we have some mystery and two very different men with well-rounded personalities. As Ma-ri interacts with both, we learn about her and what makes her tick. Hyeon-sook raised her daughter to be brilliant in school, the opposite of her mother. It put a lot of pressure on Ma-ri, and yet studying and working with books is what Ma-ri falls back on for comfort and in the side job she's hired for. It's an interesting dichotomy, both within Ma-ri as a character and between her and mother. Ma-ri is what Hyeon-sook wanted to be - Hyeon-sook still doesn't accept herself and lingers on the past.

That past is coming back to her as Hyeon-sook has an opportunity to confront Hyeon-ae, the malicious teacher who had her expelled and made her feel worthless. The confrontation doesn't make Hyeon-sook feel better, which I loved. She still needs to see herself as worth more than her short school career. Her horrible opinion of herself has taken its toll on her marriage and lead to her divorcing her husband because she feels unworthy. Her self-esteem mirrors her mother's, Soon-ok's, because she wasn't good enough for her cheating husband. These parallels between the women are just wonderful. I'm excited to see them play out.

It also comes back as Ma-ri's new freelance job has her delving into older tapes at the news station in which she finds her mother. Ma-ri gets to learn about her mom, as does the audience, and learns to understand why her mother was adamant about raising her to be top of her class  in high school and college and graduate school.

We also get to learn a little bit more about Hyeon-jung whose story has been as bottled up as her personality. She is a reporter, a career that favors the young and beautiful, and she's suffering from her age. She hasn't shared her pain, much like the other women in her family, but again, I'm looking forward to it happening.

And then there is the resident villain, Hyeon-ae, who made Hyeon-sook miserable as a teenager. She wrote a book glorifying her views of education and is being stopped by her brother-in-law who called the book for what is was: a story of abuse of power and hurting school kids. She doesn't hear him, though. I wonder if the story will lead her down the road of redemption, or have Hyeon-sook come to terms with Hyeon-ae's cruelty independent of Hyeon-ae seeking redemption.

I didn't think I would enjoy "Unkind Women" as much as I am. Maybe as a woman I can relate to a little bit of each woman's story. Or maybe as a person I can relate to how these people are trying to overcome and just live.


Written by: Raine from 'Raine's Dichotomy'