[HanCinema's Drama Review] "The Man In My House" Episode 9 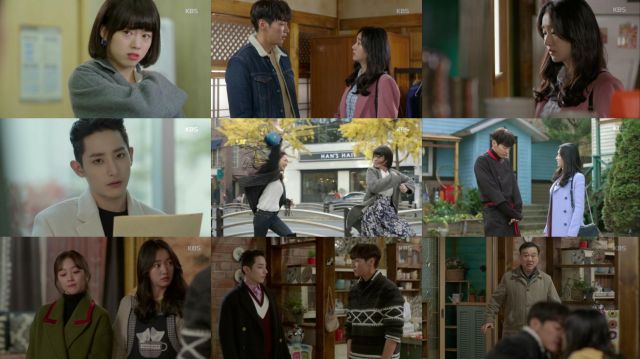 Even when the story's not moving forward in "The Man In My House", it's easy to get overwhelmed by the sheer quantity of character relationships. Weirdly enough, these tend to be centered around pretty much everyone who is not Na-ri, who remains largely oblivious to everything that happens around her. We find out this is a longstanding condition, since apparently important information regarding Na-ri's father was withheld from her because...yeah, I can't come up with any satisfactory reason.

But anyway, remember how Yeo-joo had become increasingly ancillary to the action? Well, Yeo-joo's role is redoubled here as a random hospital visit causes her to run in to Deok-bong and Deok-sim. Having characters talk about Na-ri rather than to Na-ri directly does not particularly help much when it comes to making the case that these people are important. This is especially true as Deok-bong and Deok-sim become increasingly consumed by their own petty family squabbles.

Meanwhile, Nan-gil is hot on the case of trying to figure out whether the last cliffhanger's generally preposterous revelation about his past deeds was true. Then he takes a break to respond to a goofy subplot about prospective free advertising in the form of a broadcast television crew. To which I would like to note, that's not particularly unusual in South Korean culture. Restaurants all over the country have plaques commemorating visits from broadcast television crews.

On point, though, such scenes mainly serve to demonstrate how "The Man In My House" is an increasingly busy drama, as if the production team is trying to make up for lost time having spent so much of it lately on having Na-ri and Nan-gil be all googly-eyed at each other. While occasionally the drama does manage to pull off some mildly diverting humor, the catharsis in the more serious scenes is rather limited. When gangsters can be a punchline to a joke about someone being a mild idiot, their dramatic presence suffers for it.

One unquestionably good decision was for the first several minutes of the drama to simply be a giant recap of the sequence of events up until now. Inceasingly "The Man In My House" feels like a throwback drama, to the days when viewer engagement was occupied by forcing us to remember who certain characters even are every few minutes. While this did generally manage to hold my attention, ultimately, convoluted storylines by themselves are not an especially strong selling point.

"[HanCinema's Drama Review] "The Man In My House" Episode 9"
by HanCinema is licensed under a Creative Commons Attribution-Share Alike 3.0 Unported License.