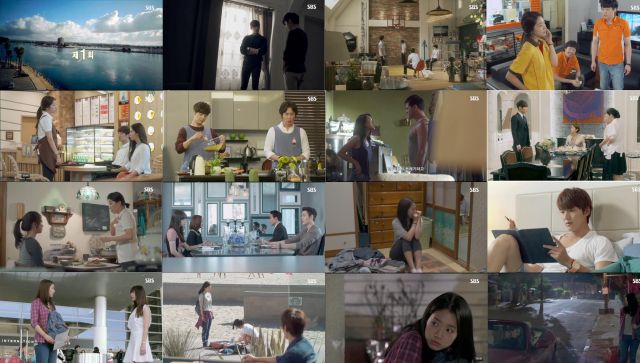 This drama starts out highlighting a rather ambivalent attitude toward the United States. On the the one hand, this is the country of awesome surfing, gorgeous scenery, and a crazy party atmosphere. On the other hand, the very name America appears to be synonymous with exploitative interaction between the sexes for ill-advised financial reasons. And this appears to be true for both the richer and poorer members of the cast.

I was not expecting "The Heirs" to take such an ambivalent attitude to Korean-American cultural interactions. But I have to admit- I'm really enjoying the creative direction. Cha Eun-Seok (played by Yoon Jin-seo) has a very interesting role here as the older sister who escapes conservative Korean society. In Western fiction, this is a common character archetype whose independence represents what makes America great, the lies she tells to her family being a tragic necessity for letting her be herself. But by reversing this dynamic, and showing it from the Korean side first, this drama exposes the hollow nature of these rationalizations and their ultimate self-centeredness.

It's rather telling that America here is treated like a giant amorphous entity where people hang out and do what they want without having to worry about their parents getting in the way. For lead character Kim Tan (played by Lee Min-ho) this is probably, maybe a good thing, since most of his interactions with other Koreans are pretty iffy. But the plotline with Eun-Seok makes it clear that being cut off from family for too long can end up pretty bad- it's impressive (and depressing) how badly she comes off here when this is literally a drama about rich people abusing their children's marital prospects for business purposes.

The style in "The Heirs" is so distinctive in this regard that I'm not remotely sure what direction this storyline is supposed to go. All the basic tropes are telegraphed for a Cinderella story, but it already looks like the easiest possible ending is off the table because the drama is surprisingly honest about just how unpleasant a place America can be. It's a jolt of realism that's of little use in a fantasy story, though it has lots of potential for quality drama- such as the lack of escape.

I suspect this is where the Los Angeles stage of this drama is going to go- right from the get-go we see that characters can't defy their fate by just partying in America indefinitely, and that one way or another, the pursestrings are going to show up and demand some responsibility. Responsibility in exchange for activities that clearly require money yet don't actually accomplish anything? Talk about putting a damper in the wish fulfillment- by all means, let's see how far this particular rabbit hole goes.