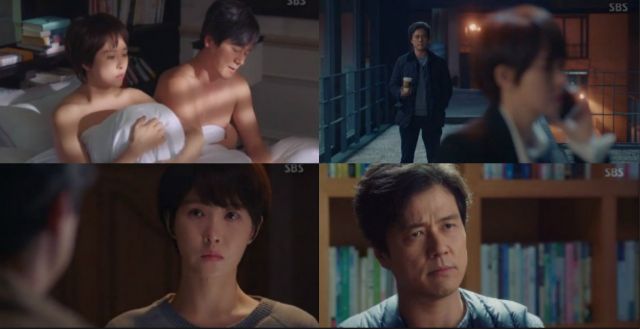 One aspect of Soon-jin's characterization that's been kind of glazed over is how she was initially interested in Moo-han solely for his money. Well, that's not true, Soon-jin's weirdly self-conscious seductress pep talk monologues have been a fairly constant staple of the drama's comic relief. It's just easy to forget that because whenever Soon-jin is talking to Moo-han directly, she's being perfectly sincere. Soon-jin has started to rely on Moo-han as a crutch in her weaker moments.

But not all the time. Observe how Moo-han doesn't know about Soon-jin's eviction. Since Moo-han never goes to Soon-jin's place, there's no reason why he would know about it. That's one of the better ironies of Soon-jin's character. She knows that going after Moo-han for his money is shameful, and is reluctant to try and solve even short term problems by asking him for some, feeling that bringing up finances at all will cheapen their relationship.

By sheer luck (or possibly fate) this is entirely in line with Moo-han's beliefs, just not for that same reason. A key part of Moo-han's gloominess has been the realization that money doesn't make him happy, and probably can't make him happy. This is also the key difference between Moo-han and his ex-wife. Seok-yeong is about as gloomy and depressed, though she is equally as rich. However, instead of retreating to passivity, Seok-yeong maintains an active attitude about life- even when the only motivator she has is spite.

I really liked the incredulous look on the cop's face when Seok-yeong demanded on pursuing charges against Soon-jin for throwing I-deun into the lake. Because really, what's the point? And besides that, this is a very glass house attitude to take when I-deun herself is facing much more serious charges for stealing a truck and destroying valuable equipment. Soon-jin has already lost her job and home, while I-deun is still expecting to just be able to buy her way out of any punishment.

This is probably why Moo-han dislikes money so much - and by extension, Seok-yeong and I-deun. Wealthy has turned them all into miserable people. Which is why Moo-han makes the choice he does in the end rather than take the expected way out. Hard though it may be to believe, Kyeong-soo is right, via knowledge that comes from experience. If your love isn't unconditional, if it doesn't survive through every possible contingency, was it ever really love in the first place?

Note : Due to licensing, videos may not be available in your country

"[HanCinema's Drama Review] "Shall We Kiss First" Episodes 15-16"
by HanCinema is licensed under a Creative Commons Attribution-Share Alike 3.0 Unported License.