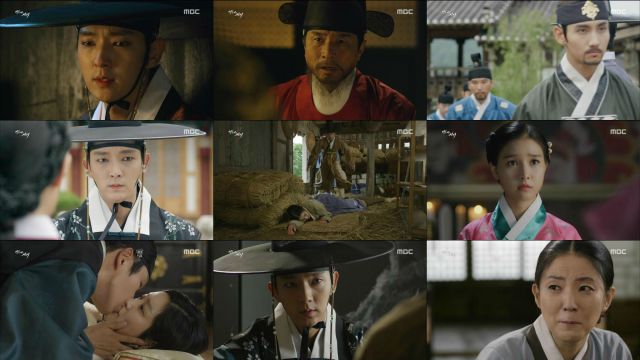 Even though Jang-seon isn't actually in jail anymore this episode of "Scholar Who Walks the Night" somehow manages to be even more lurid and depressing than the last one. Granted, after the ending of the last episode we could hardly have expected this one to be all sparkly vampires and rainbows, but even so. I can only tolerate so much abuse of the lead heroine before it just gets to be incredibly offputting. The camp elements are pretty much completely absent here.

Note that even though there isn't any camp, there are still vampire rules, none of which mesh that well with the drama's current dramatic tone. Kisses out of nowhere were kind of cute back when Jang-seon was all peppy, but now that particular plot device just feels forced and awkward. "Scholar Who Walks the Night" is not, and cannot be a story about love conquering all, if only because Seong-yeol doesn't want to be a vampire and is probably planning to kill himself once Gwi is taken care of.

As far as that story goes, there's not too much scheming from the bad guys. But Seong-yeol finally gets a good look at the book, which means that this storyline is hopefully done with and next time our lead characters are going to get back to the actual interesting conflict. Thinking in broad perspective, I think the death of Jang-seon's father was intended to give her motivation to keep fighting even though her services are no longer necessary.

While this does make sense, it doesn't make sitting through this episode any more fun. We've seen Gwi kill scores of people so far, but these events have always been too wacky to inspire much empathy regarding the difference between life and death and good and evil. At this rate "Scholar Who Walks the Night" is going to wreck its camp appeal completely by trying to turn into too serious a story with too ridiculous genre trappings.

I'm hoping this is just a temporary bump in the production rather than part of a more long-term transition. "Scholar Who Walks the Night" is not yet by any means a terrible drama- the internal logic is still fairly strong. The character reactions, while at times stupid, are borne out of irrational emotions more than contrived writing. But overall I find myself sympathizing with Hye-ryeong right now. The heroes are doing a bad enough job keeping the situation under control that all they really warrant right now is a look of mild contempt.