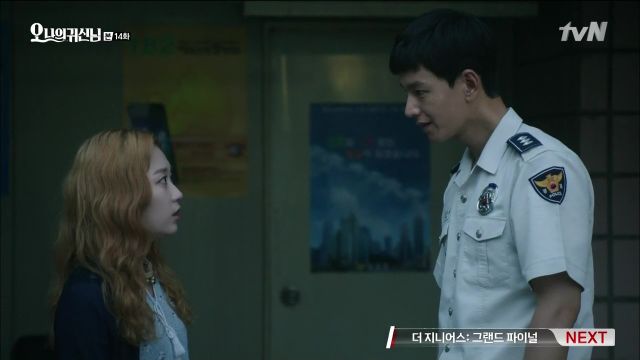 As Seon-woo learns to cope with reality and the ghostly and nefarious situations surrounding him, Soon-ae is coming closer to the truth behind her death and the truth that haunts Seon-woo's family.

Soon-ae is such a marvelous character and Kim Seul-gi handles her with finesse. Love for Seon-woo is strong, but the need to discover the truth behind her death is stronger. She doesn't keep secrets for episodes on end, but quickly includes Bong-seon and Seon-woo. An often used method of suspense in K-drama is to keep secrets for an abnormally long period of time, let them fester and blow out of proportion. It's a tool of poorly planned plotlines, which "Oh My Ghostess" does not have. Instead, Soon-ae brings in Bong-seon, Seon-woo and shaman Seobingo to be part of her ghostly investigation team.

The mystery finally becomes more intense as Soon-ae thoroughly investigates her past, while at the same time the evil spirit possessing Sung-jae looks for her. Sung-jae's life is set in relief, we see how the ghost has made a total mess of the people he loves and escalates into more violent deeds. His partner realizes too late that Sung-jae isn't all he seems and loses his life in the process. The partner was easy to care about despite his small role and his death was powerful in that possessed Sung-jae flicked it aside so easily. What I want more of is Eun-hee's personality and story as well as her role in Seon-woo's life and Sung-jae's life.

Seon-woo was particularly natural in his struggle to acclimate to the fact that Bong-seon was possessed by a sex-crazed, friendly ghost who had a genuine liking for him. Jo Jung-suk handled the juxtaposing feeling within Seon-woo with panache. Seon-woo is such an easy to like character because he is upfront about his feelings and because his anger doesn't mean complete severance in a relationship, just that there are a few things that need to be worked out. It's a healthy relationship he fosters with Bong-seon, which is rare these days in the world of K-drama.

As for Bong-seon, with Seon-woo's openness towards her unusual abilities and situation, she grows into a stronger and more mature woman. She opens up more to him and can now offer her comfort in the same way that he's offered her comfort in the past. She's honest with her feelings and her needs and is much more able to engage in open communication.

The last pair of episodes is upon us and we finally get to see how Seon-ae died and hopefully put her and her family to rest. We will also hopefully see Bong-seon really come into herself as well as Seon-woo truly feel comfortable in his own skin.