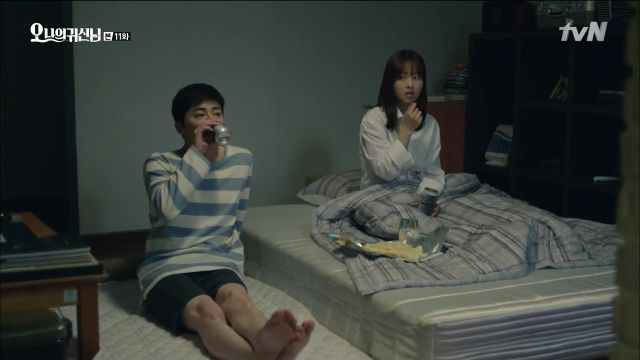 "Oh My Ghostess" has its flaws, but they are overpowered by its strengths. The balance between Jo Jung-suk, Park Bo-young, and Kim Seul-gi is such a delicately struck balance that it seems almost natural to imagine ghosts and ghost possession as a part of everyday life.

Man, woman, and ghost struggle to come to terms with the events in the lives (or life after death), and in that struggle they are more relatable than ever. They work through self-esteem, loneliness, and growing pain issues all while a mystery looms overhead - the mystery of Soon-ae's death and how she came to be a frustrated ghost in the first place. What works so well with Soon-ae's character is that she is not just a sex-crazed ghost who has no idea how she died. She is also an innocent, love-hungry, friendship starved young woman. She has a human soul wrapped in supernatural goodness. She gets jealous just like a woman, but that jealousy means the end for Soon-ae as a ghost: the transformation into an evil spirit. It's a clever play on jealousy and anger. It also makes her situation more dire; that along with Seong-jae latching onto her tail.

The mystery of Soon-ae's death is coming to the fore and the fingers of its circumstance reach out and grab onto everyone around Soon-ae. Her curiosity flares as she realizes the accepted reason behind her death was suicide, which is, to her, a nonsensical reason. She is the one to look into her death and take charge, which counters the depiction of Soon-ae as a frivolous sex-hungry ghost. What grounds her further as a character is how she becomes friends with Bong-seon, something that both lonely young women needed, and how that friendship means enough to her to give up on her quest to banish her virginity and leave her love to her new friend.

Bong-seon also grows, but no at the same breakneck speed at Soon-ae. Soon-ae as a time limit. Bong-seon has the rest of her natural life. Even so, in this episode she learns to start thinking of herself and quit apologizing and taking on responsibility that is not hers. She thinks about what she wants, love, and goes after it. It's good to see her go after something rather than hold back in fear.

"Oh My Ghostess" also tackles sexuality in relationships in a way that television usually does not, or cannot, because of censorship. Sex is a natural and healthy part of relationships, and when stifled, can cause major problems. We see how that affects both partners, Seon-woo and Soon-ae/Bong-seon. It causes tensions and misunderstandings and jealousy. It's wonderful to see a relationship in its entirety shown on television and be allowed to run its course, even if there is a taste of the supernatural mixed in here and there.

Bravo to the mystery and for taking on taboo issues, "Oh My Ghostess". Despite the fact that Seon-woo's mother is an awkward addition to the show and that Seon-jae's development has been less than stellar, you are still a fabulous show.