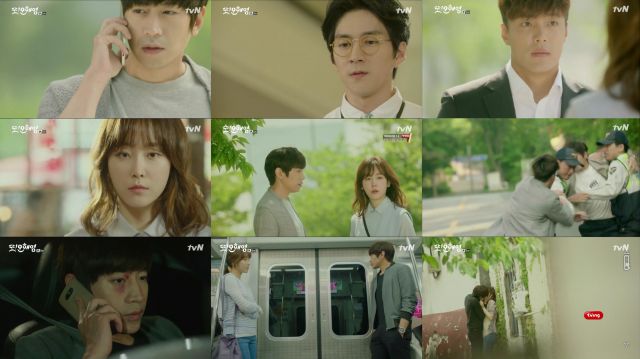 Strictly speaking the way "Oh Hae-Young Again" replays footage from past episodes as flashbacks is a tad excessive. Do-kyeong's precognition is, itself, another form of this. But I'm always impressed at how these flashbacks accompany new information that puts these past events in radically different perspective. Way back in the first episode I thought Deok-hee came off as a bad mother. While subsequent events have better contextualized the relationship between Deok-hee and Hae-young, it's only here that Deok-hee realizes an alternate context makes her look much, much worse.

"Oh Hae-Young Again" also does its usual tough balancing act of having strong second leads. Well, all right, Tae-jin hasn't really been around enough to qualify as a second lead. Even so, Tae-jin serves the same basic purpose as the other Hae-young in that his behavior has sympathetic (if frustratingly unexplained) motivation. What's more, Tae-jin's appearances in flashback give the impression of a genuine loving partner, whose current overtures are ineffective mostly due to an inability to properly perceive appearances.

Which just goes on to beg other questions. Take the big ping-pong scene between Do-kyeong and the other Hae-young. Is it a sign of the true strength of their affection, or is the very happiness of the moment indicative of the shallowness of their relationship? Sure, sweet nothings are great in the here and now, but they're far less useful in the event of a genuine crisis.

Yet pride still remains the main issue. Do-kyeong still can't admit that he wants to see Hae-young. It seems as if his visions mainly serve the purpose of provoking Do-kyeong into making uncharacteristically aggressive romantic gestures. It is telling that Do-kyeong is able to make the time to go on these elaborate searches for Hae-young. That much is probably an indication that, work notwithstanding, Do-kyeong's friendless lifestyle has left him with more spare time than he would like.

On a lighter note, I rather like how "Oh Hae-Young Again" appears to be fetishizing terrifying women, mainly by making them seem more interesting than the more conventional Hae-young. What else to make of Soo-kyeong's deranged French ranting, or how Anna is dragging Hoon by the nose to all sorts of strange places? Hae-young, of course, outdoes them all by sulking in a way that makes it clear she does not want to be found. It's scary indeed, for Do-kyeong to think that without his visions Hae-young could be hurt. Especially considering how Do-kyeong doesn't seem terribly concerned with his own physical well-being.