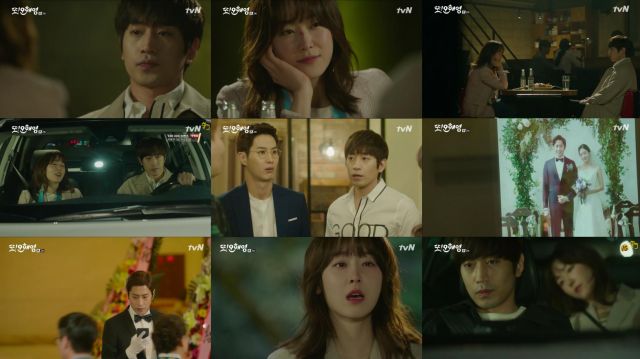 From Do-kyeong's perspective Hae-young frequently comes off as unexpectedly frightening. It's mostly in the weird stone-faced way that Seo Hyun-jin delivers her lines. It's hard to tell whether Hae-young is being flirtatious or viciously sarcastic. Often it's not clear that Hae-young herself has any idea how other people interpret her actions. Hae-young is at her most attractive when she outwardly expresses the least concern about what other people think.

But Hae-young does care about what other people think. That's what gives her flashbacks a real edge even when the context is humorous. A lot of how Hae-young acts is a defense mechanism from being hurt in the past. She practically says this outright to her co-workers and they still just don't get it. Hae-young's own mother doesn't really understand why Hae-young acts the way she does, which is what ultimately leads to the rather dramatic ending where Hae-young's comedic attitude clashes with the deadly seriousness of a stressful home life.

In the abcess of memory Do-kyeong is surprisingly well-matched for Hae-young because he, too, now treats too much of his life as a reaction to his broken relationship with the other Hae-young (played by Jeon Hye-bin). His premonitions of the future involving the main Hae-young are a curious contrast to the faded flashbacks where the other Hae-young plies Do-kyeong with sweet nothings, only to stab him in the back right when he's at his most sincere.

Watching Do-kyeong in flashback is genuinely painful. I've been in that spot too- thinking that a significant other must be seriously hurt because what else could explain the sudden lack of communication? With Do-kyeong and Hae-young's flashbacks put together the answer's a pretty obvious one- because the other Hae-young is a conceited jerk. The problem is that even if Do-kyeong had all that information, it's much easier for him to conclude that he's just a terrible person who doesn't deserve love.

Comedic trappings notwithstanding "Oh Hae-Young Again" is one of the harshest indictments I've ever seen when it comes to modern dating. Observe how, by design, Hae-young and Do-kyeong are always at arm's length, barely even thinking about each other yet so seriously engrossed in their work because work is comforting. They understand the rules. Even when yelling is involved the yelling is always being prompted by some specific reason. That much is a blessing compared to flashbacks where Hae-young and Do-kyeong are treated like furniture.