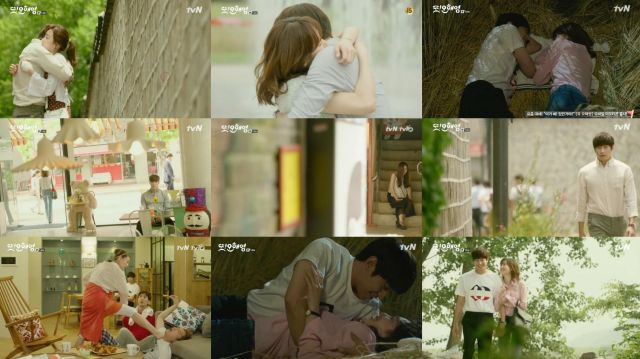 Now that Hae-young and Do-kyeong are back together again, "Oh Hae-Young Again" moves to cute filler material. On one end it's nice to get a reprieve considering how gloomy the drama has been lately. On the the other this is some of the weaker cute material we've gotten from the drama and much of it accidentally paints its characters in a bad light. Considering how Hae-young just had a hospital scare, it was really pretty insensitive to not phone her parents and tell them she'd be late. Then again why didn't they just try to call her?

It's not that the scenes are really all that bad- it's just they constantly run into basic logical problems which rather undercut the emotional impact of the usual warm heartfelt conversations. The flashback involving the other Hae-young is the main exception to this, but it works largely because no effort is made to be cute. It's just a cold reminder of what we already know- that for all the superficial advantages conferred on the other Hae-young, the main Hae-young has had the much stronger benefit of a genuinely loving family.

Yet even that strength is undercut by the revelation of Soo-kyeong's idiotic plan to deal with her pregnancy- the whole "move overseas" cliché that I really wish Korean dramas would stop using. While in comparative terms single mothers in other countries have an easier time than those in South Korea, it's not like a Korean woman can just pack her bags and everything will be hunky-dory. Immigration is hard, and it's not like we roll out the red carpet to domestic single mothers either.

Moreover, Soo-kyeong has consistently been portrayed as depressed, and those issues directly stem from a troubled relationship with her own mother. Imagine a person like that trying to raise a child alone in a foreign country on the opposite side of the world from her support network. Thankfully by the end of the episode enough information is out there for other characters to hopefully prevent Soo-kyeong from following through on this idea.

Overall those elements are the main thing making me uncomfortable with this episode- "Oh Hae-Young Again" has always used a lot of staple drama clichés but they've been well-disguised under the more creative aspects of the production. Although the drop in writing quality may be a result of the two episode extension. The cliffhanger is just as shocking and powerful as usual, begging the question of what will happen next.