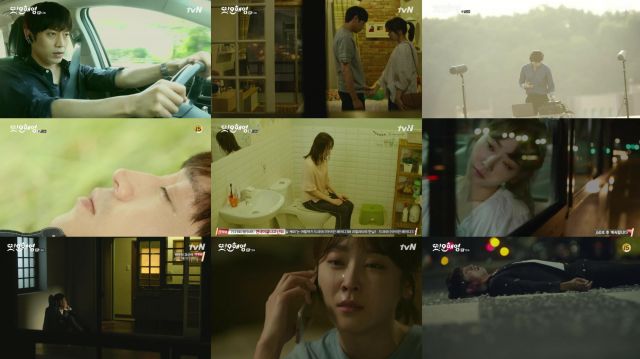 At first it seems like life has merely moved on. Hae-young is grumpy at home, and Do-kyeong is obsessively perfectionist about the latest dangerous to reproduce sound effect. But the situation quickly takes a turn for the worse when Hae-young impulsively picks about the worst possible target on which to vent her frustrations. The result? Hae-young makes the big tragedy of her life seem like an epic joke.

There's an element of self-pity which is very easy to identify with. Because let's face it. We've all had these kinds of horrible situations that we can't really talk about because out of context the stories sound stupid and funny. But in addition to being a very real auralization of Hae-young's pain, Hae-young's public discussion of the story also proves a helpful vehicle for showing how the rest of the cast reacts to the pain of other people.

Like Jin-sang, who puts a strong, genuine effort into being a good friend, and can tell when people are hurting, but almost always manages to say and do exactly the wrong thing. Take his entire speech to Soo-kyeong about the importance of taking responsibility. Yes, there's the literal irony given Jin-sang's relationship to Soo-kyeong's problem, but the subtext is pretty essential too. Even in Jin-sang's interpretation the situation was his fault because he encouraged her. Likewise, Jin-sang has never really taken responsibility for provoking the entire Hae-young mess either.

Soo-kyeong, by the way, is great at understanding self-pity, because self-pity is practically the only thing she does in her free time. But amazingly enough, Soo-kyeong deserves it. Every time Soo-kyeong meets her mother she comes face to face with her own most hated personality flaws. Soo-kyeong is rather perfectly mismatched with Jin-sang because he can see that she needs reassurance but always fails to do it correctly.

Soo-kyeong and Do-kyeong are both rather horrible images of what a person looks like when they have no concept of love as a kind of positive reenforcement. That's what makes it so scary to watch Do-kyeong at the end, trying to be the calm voice of reason while realizing he simply has no authority to do that. Do-kyeong needs an influence like Hae-young in his life in order to move him away from being evil and spiteful. Without that, there's just a vision of the cold workaholic Do-kyeong who might as well be dead. Compared to that, is humility really so awful?