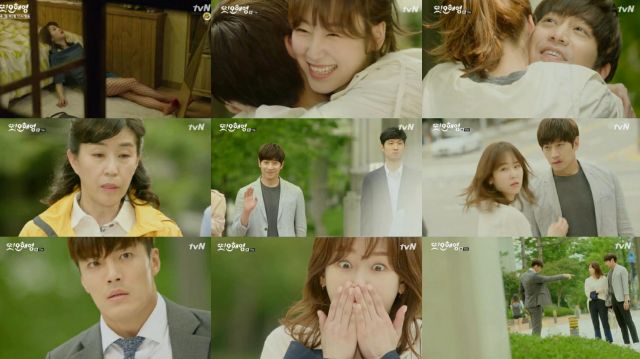 Poor Tae-jin. He's pathetic and sympathetic yet...that doesn't matter to Hae-young. It doesn't matter to anyone's ex-girlfriend, or ex-boyfriend for that matter. Nobody wants to get back together with an ex out of pity. As "Oh Hae-Young Again" moves into the open information stage, and everyone finds out every essential detail of the major plot, that basic element of human nature is simply not enough to give Tae-jin any kind of serious leeway. This is true even as the dual Hae Young element vastly complicates the situation beyond Tae-jin's original assumptions.

I find it interesting how neither Do-kyeong nor Tae-jin appears to have been aware ahead of time that there were two Hae-youngs. With the other Hae-young it's easy to define that in terms of her usual obliviousness. Becoming aware of Do-kyeong's actions does a number on the other Hae-young mentally, although it takes awhile. First she's just a victim, then she thinks of Do-kyeong's act as being a misguided act of love until finally, horribly realizing that if anything, Hae-young's hostile attitude was pretty understated given the situation.

Yet the emotional stakes are even higher for Hae-young, who at this point feels pathologically persecuted by the spectre of the other Hae-young. The worst of it is that Hae-young has tried to deal with this problem rather sensibly by trying to ignore it. That's why Tae-jin didn't know. With Tae-jin, Hae-young wanted a normal, sensible boyfriend who treated her as a priority without having to see all the ugly psychological warts.

This is all the usual tough stuff for "Oh Hae-Young Again", with its arguments for how perception of weakness matters more than love in a relationship. Observe the late scene where a rather strangely made-up Hae-young demands obedience from Do-kyeong- the very same obedience that Tae-jin had previously offered without thinking. Even though Do-kjyeong knows that he's very much in the wrong, pride is too much of a factor.

...Well, not just pride. Shame's in there, too. And we certainly can't forget guilt. Do-kyeong has problems. So it's nice to see that for all his gruff demeanor, Do-kyeong's guy friends/employees are capable of offering decent emotional support. Although that same sentiment is what makes Do-kyeong's mean trick against Tae-jin all the worse. Note how from Tae-jin's perspective, Do-kyeong violated man law. Stealing a girlfriend is not cool. And that kind of behavior is so diametrically opposed to Do-kyeong's actual personality that even being thought of that way...it makes a guy want to be punched.