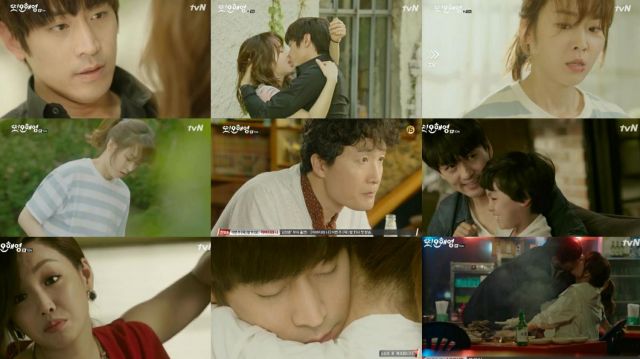 Do-kyeong has lots of good reasons to be trying to get mental help right now. So it's a rather appropriate irony that, rather than discuss deeper root mental problems, visions of Hae-young always dominate the conversation. But worry not- we get an increasingly clear portrait of the psychological issues that make Do-kyeong the person he is. His inferiority complex, the superior attitude toward siblings, parental issues and of course, Do-kyeong's powerful reluctance to admit he likes Hae-young at all are forced front and center.

It's a little distressing to see how far back Do-kyeong's issues go and how they run in the family. I briefly confused Soo-kyeong's mother for Soo-kyeong herself because they have distressingly similar mannerisms. It's really unsettling to realize that, matching personalities notwithstanding, Soo-kyeong appears to have lived her whole life trying not to be like mom- a woman who got married at the age of eighteen and spent most of her energy since then subtly abusing family members with mean remarks disguised as well-meaning advice.

And of course Do-kyeong does this too, although it takes that tense scene with Hoon for him to realize it. But at the same time, it's not all doom and gloom in family flashback land. We get one wonderful if inevitably tragic scene featuring the siblings' father, played by the always great Lee Pil-mo. He represents the warm passionate spark that the siblings show off in their best moments, which is what Do-kyeong comes back to.

...I feel increasingly ridiculous not discussing Hae-young's character lately, although that's mainly because there's nothing to discuss. Her problems just feel so insignificant compared to Do-kyeong. But they often seem larger than that because Hae-young is capable of expressing her emotions in a healthy way without constantly feeling ashamed of herself. That's the value in good parenting, one of the many subjects upon which "Oh Hae-Young Again" touches subtly and masterfully.

In strictly archetypal terms Hae-young is the good girl who fixes the broken heart of the attractive yet emotionally closed off man. While under normal circumstances this is a trope worthy of mockery, "Oh Hae-Young Again" never goes into that kind of territory because Hae-young has always been defined, willingly or not, in terms of her flaws, represented by a failure to measure up to the other Hae-young. And I like that. It's OK for a person not to be perfect as long as they're genuinely trying, which is why it means so much when Do-kyeong chokes down his pride and tells Hae-young what she wants to hear.