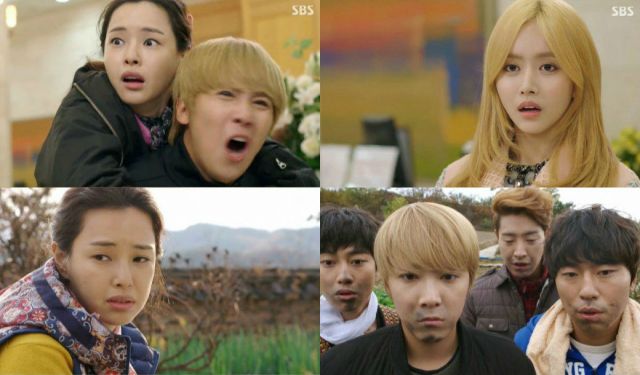 This episode moves into obvious romantic territory, as the number of potential couples is clearly defined as five. I can't remember having ever seen a drama before that had five potential pairings, all given roughly equal weight in terms of storyline presence, but here we are. Far from being crowded, though, "Modern Farmer" actually makes a pretty good go of it because the five romances build on each other with different explorations on attitudes toward love.

For Min-gi and Kang Hyeok, love means maturity. Min-gi in particular might get mad or agitated, but in the presence of people he cares about, the man still manages to act reasonably level-headed. This is quite a high point for the characters given how obnoxious they were earlier on in the drama. The hints here as to the troubles in their city lives go a long way to mitigating this earlier behavior. The obvious sense of caring and camaraderie they show to Yoon-hee establish that they are, in fact, basically good people.

Han-cheol and Gi-joon are, by contrast, comedic fodder. They're not even in actual relationships, but react immaturely to the situations they're in. Unsurprisingly, their situation continue to deteriorate. In both these cases we're either heading to a breaking point or they somehow actually get together with their opposite. It's impossible to tell at this point what kind of resolution "Modern Farmer" is gunning for, which does a lot to bring tension to generally silly situations.

The last man is Sang-dook, who continues to be pursued by his first love. It's an interesting situation because usually we see these kinds of "come back to the hometown" stories from the other angle. In this case, though, Sang-dook is the guy who's been here this whole time. And it's easy to see why he finds his ex-girlfriend's nostalgia insulting. Whatever her reasons are for coming back, he's had a life since then. Sang-dook hasn't been waiting for her or anything, so she shouldn't act like this is destiny.

Although I have to admit, that was a pretty great joke where she does, in the end, get her wish to once again hide away with Sang-dook in the cabbage patch. Really, all around the humor here is pretty great, mainly because it's centering around clearly defined characterization. "Modern Farmer" has developed a fairly strong cast of characters here, making for a nice ensemble comedy performance. It's pretty fun stuff.