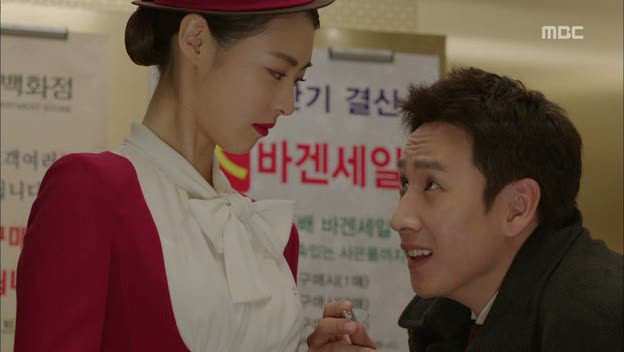 MBC's "Miss Korea" is a reunion between director Kwon Seok-jang and writer Seo Sook-hyang who worked together on 2010 drama, "Pasta". The similarities between the two dramas are many: the camera work, the background music, the cast, and the extended flashbacks are all reminiscent of "Pasta". However, "Miss Korea" is different enough that it didn't feel like watching "Pasta" 2. The leads are winning and their characters are solid and engaging. The story is as advertised and is thus far just working on setting a pace and laying out the basics.

Perhaps the strongest part of "Miss Korea" is the anticipation for the future and how the leads work together to make the "Miss Korea" team. It's still in "setup mode" that made this first episode feel very incomplete. There were a lot of overly long flashbacks to establish the prior relationship between the main leads Kim Hyeong-joon (Lee Sun-kyun) and Oh Ji-yeong (Lee Yeon-hee), which was lots of fun and plenty adorable. He is a brilliant scientist who pours his intelligence into creating cosmetics, but who has bad luck with business. She is a beautiful elevator girl who is sexually harassed by her boss and in danger of losing her job. "Miss Korea" will bring Hyeong-joon's cosmetics the exposure they need and will give Ji-yeong the promise of a future beyond smiling prettily and pushing elevator buttons.

The premise isn't strong so "Miss Korea" needs to rely on its characters to give the story pizzazz. Yeon-hee is particularly amazing as the winsome and headstrong Ji-yeong. Hyeong-joon is a bit of a fool while Lee Sung-min plays Jeong Seon-saeng, an incompetent loan shark who needs to collect money from Hyeong-joon to survive. Seon-saeng (his name means "teacher" in Korean, which makes for puns galore) is one of the most interesting characters in that he is not fit to be a loan shark, and yet must force himself to be cruel in order to live. To round out the main cast is the talented Lee Mi-sook as Ma Ae-ri, a beauty salon owner who finds girls and grooms them to be "Miss Korea". She is the opposite of Hyeong-joon in business: swift and calculating. She is not the most engaging character in the cast, but Mi-sook is always strong on screen. I look forward to seeing more from her.

Direction of this first episode was also a little unclear. There are sudden meetings between characters that are confusing despite the buildup that happened in the episode. The fault lies in the messy setup that should be cleared up in episode 2, but until then, the confusion remains.

The decision to use a lot of the same cast as "Pasta" could either be a strength or weakness. "Pasta"'s cast had great chemistry and that could work to "Miss Korea"'s advantage. Or, it could fall into the trap of becoming too much like its predecessor. This first episode did not give a strong enough impression for me to feel one way or the other. At the end of the episode I could only think, "Let's wait and see". Hopefully it will pick up steam.