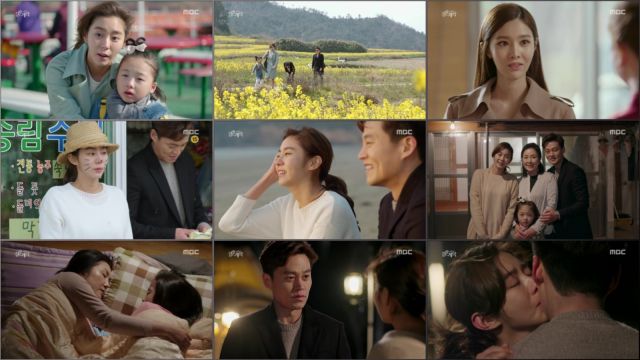 Mi-ran's escape is short-lived- as it turns out, Ji-hoon has a very good idea of where she's planning to go. Really, there's only one place Mi-ran can go, feeling so humiliated and ashamed about the sacrifices her son is willing to make. Mi-ran goes to see her parents- to whom her own filial loyalty was less than inspiring. In practice and form, Ji-hoon ends up taking a much needed break from the dysfunction of his family to try and enjoy some time with his mother. Hye-soo and Eun-seong tag along to help.

Technically speaking Hye-soo's motivation, right until the end, is quite cynical. She's thinking of her own situation, frightened about what will happen to Eun-seong after Hye-soo herself likely dies in the near future. It's easy to compare Hye-soo to Na-yoon, a woman whose desire to be with Ji-hoon has less to do with emotional sincerity and more a desire to "win". Even the big event that closes out the episode is just Hye-soo trying to think tactically.

But that's what makes the moment so powerful. Look at the tears streaming down Hye-soo's face. She's frightened and ashamed of her actions. Yet deep down there is some sincerity there. Hye-soo admires Ji-hoon's sense of honor. He's a man who will do anything for his mother, who doesn't believe in holding Hye-soo to an obligation unfairly, and most importantly of all, Ji-hoon is a man who will stand up for Eun-seong and do anything to protect the little girl with no other protector.

It's heart-wrenching stuff, because Ji-hoon sees Hye-soo as being like his own mother. Not in a creepy Freudian way or a Madonna complex or anything like that. It's Hye-soo's sense of patience, her own sense of honor, and how she's been one of the few positive influences on his life where Ji-hoon is trapped between disobeying his father and betraying his brother. What kind of family is that- why doesn't Seong-gook just order Jeong-hoon around instead? Jeong-hoon actually desires his father's approval.

The performances in "Marriage Contract" really are great. I love how Ji-hoon has been growing by bits and steps. By the end of the episode, Ji-hoon is willing to go after what he wants without reservation. For possibly the first time in his life, Ji-hoon feels that he knows what's best for his own life. I think that even if Ji-hoon knew Hye-soo's more cynical motivation, he could accept that. Because Ji-hoon, too, just wants someone who's worth fighting for.