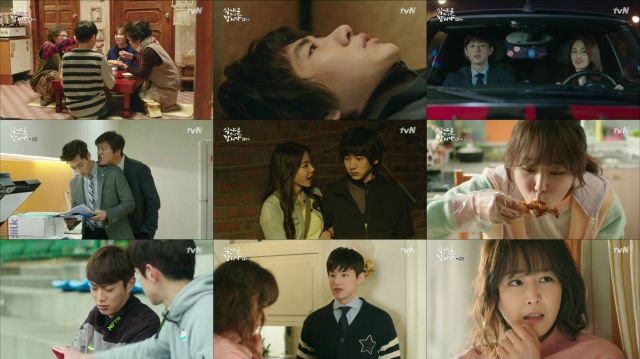 Now that Dae-yeong has accidentally exposed the drama's premise to Sang-woo, there's not really any getting around the general sense of awkwardness. I like how Sang-woo seems generally perplexed at the idea that women would have any romantic interest in him. To be entirely honest I'm kind of confused on that point too, but then it's not like love is supposed to be easily understood or anything like that.

...Well, no that's not entirely true. We know exactly, for example, what the deal is Hye-rim. She likes getting attention from men. And it would seem that the woman has finally managed to antagonize one who won't just fade away meekly into the night- maybe. That entire plot point is dealt with here in sort of an odd way. I'm not really sure whether these two are supposed to be a couple we want to get together or whether this is all just foreshadowing for another larger, much more elaborate plot.

The solution to this plot point as well is...rather unsettling actually. The awkward part about all of this is that Soo-ji's excessive dieting was, in itself, unhealthy behavior. It's a different kind of unhealthy behavior than what she puts herself through here but all the same, Soo-ji appears to jump between wide emotional extremes. It's easy to see why the prospect of romance appeals to her so much. At the same time, it's rather obvious that romance is not a long-term solution to her problems. But then, what exactly is the point of "Let's Eat - Season 2" if it's not a romantic comedy?

This is the same question I often asked myself during the first season of "Let's Eat". And it looks like in a different way, "Let's Eat - Season 2" is also aspiring to be in some sense an anti-romantic comedy, with most of the power of the jokes coming from a different direction. This is a drama about strange rivalries- not in the sense that they're weird but that the battles line are drawn in a rather peculiar way. Whether or not this is a battle anyone can really win, well...who knows?