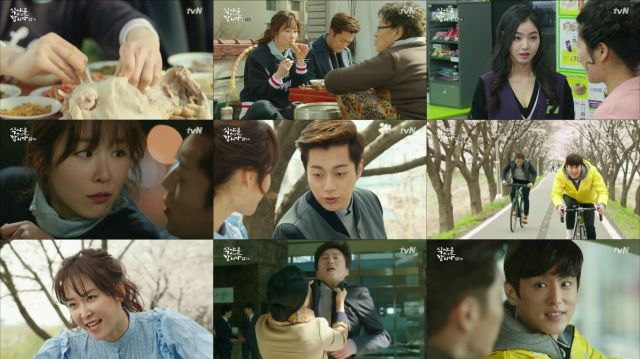 The mystery of the person who lives on the roof of the building is resolved appropriately- with a revelation as to the very serious financial penalties involved in building an illegal add-on to an apartment building. All right, that's somewhat ridiculous- which is good, because self-ridicule is always where "Let's Eat - Season 2" has been at its strongest. Most of the characters are at their most amusing when their perception of reality is challenged by their own apparent cluelessness.

Except for Dae-yeong. He knows that he's clueless, and doesn't really care. Which makes it all the more easier for him to identify where other people are going wrong. I'm really kind of impressed at this point seeing how little Soo-ji understands of men. Every time the three leads of this drama are together it's just Dae-yeong hurriedly trying to run damage control before Soo-ji accidentally reveals how unattractive she really is.

There's that, and also his counters to Sang-woo's increasingly bromantic attitude. Most guys get excited about hanging out with women. Sang-woo gets totally stoked about hanging out with his bros. The question of why Sang-woo's personality abruptly goes through such strange, sudden, and radical shifts is once more left mostly unexplained. Although it does make fairly good fodder for jokes. It's the clash of distinct temperaments that make for the best humor in "Let's Eat - Season 2"- and Dae-yeong makes for an effective straight man precisely because his attitude is the only one that never changes.

Now that there's anything wrong with that. This episode consistently manages to throw out funny jokes, finally leading up to a bicycle sequence that of course doesn't go to plan because personalities are stronger than tropes. Which also defines the equally amusing bike training scene, where Dae-yeong quite obviously doesn't know or care that this is the part of the story where he's supposed to fall in love with Soo-ji. And Soo-ji, for her part, is equally annoyed with him. In the end, just another fun day for "Let's Eat - Season 2".