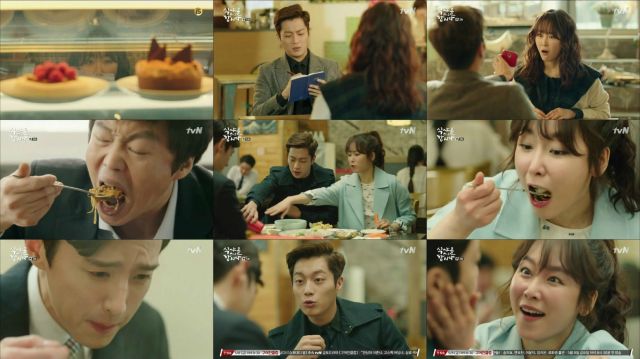 This episode jumps right away to the finer more important points of the plot- Dae-young teaching Soo-ji how to act like an attractive woman. I'm not sure which part's funnier actually. There's the apparently sexless Dae-young being a complete master of romantic interaction. And then there's Soo-ji not having the slightest clue about what he's talking about. She completely whiffs Dae-young's softball attempt to try and get her alone in the same general area as Sang-woo.

By the way, I've figured out why Sang-woo doesn't appear to have any personality. It's because he quite literally does not have a personality. Sang-woo really is just a guy who comes to his lonely, clean apartment, observes his robot, and leaves. It would come off as sad and pathetic except that Sang-woo really doesn't register any kind of reaction. The man barely even seems to have emotions, which begs the question of why Soo-ji is so enraptured by him.

Well, because love is irrational that way. I also like how Dae-young can barely hide his thinly veiled disgust at how apparently shallow Soo-ji is. Part of this is just that the guy's very observant. Dae-young quite literally seems to be the only person capable of noticing that Hye-rim (played by Hwang Seong-eon) has the power to manipulate men into doing her bidding. And I can't help but laugh at the way he flippantly and inevitably brushes off Hye-rim's attempt to use that power on him.

Now this is the Dae-young I know and love from the first season of "Let's Eat". Yoon Doo-joon is quite excellent at comedic interplay to the incredulous expense of chemistry. I have no idea whether he's actually going to get together with Soo-ji- there's the same deliberately ambiguous dynamic that was present with Soo-kyeong in the first season. And here as well, this does wonders for long-term speculation, giving us a story that's nearly impossible to predict.

Certain mysteries, though, appear poised to have answers shortly, so the dramatic tension shouldn't overtsay its welcome. Beyond that though "Let's Eat - Season 2" is currently excelling where it most matters- the jokes. I love how Dae-young is totally nonplussed by women yet Taek-soo (played by Kim Hee-won) is a chronic weakness. A woman Dae-young can get rid of just by ignoring her. A guy, unfortunately, doesn't know how to take obvious disinterest as an insult. That makes for a surprisingly fresh joke that i most certainly want to see of.