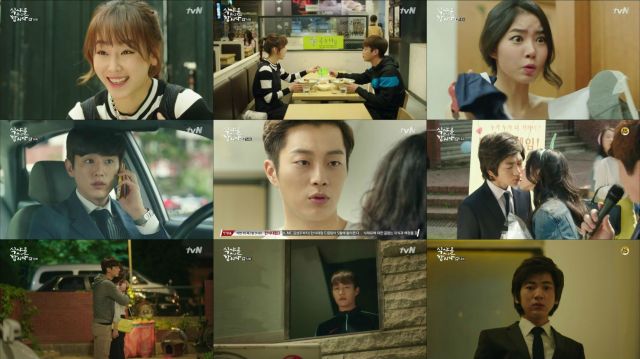 As if to reprimand me for doubting its seriousness, the mystery plot of "Let's Eat - Season 2" ends on a pretty shocking cliffhanger, particularly so coming right after a super cute date sequence. Not just shocking, either, but overall well-integrated, because the mystery plot and the main Soo-ji plot share one important commonality. Both are being interrupted by unnecessary snooping. Of course Jeom-i is snooping- that's what old ladies do. But why is Soo-ji so obsessed about Dae-yeong's imaginary girlfriend?

Contrast Soo-ji and Sang-woo. They're basically not going out on dates at all right now because Sang-woo wants to eat expensive high quality food and Soo-ji knows she can't afford it. This is kind of an irreconcilable difference. I mean it isn't really, because Soo-ji could just let Sang-woo buy the food. The problem is less that this runs contrary to Soo-ji's philosophy regarding romantic relationships and more that she refuses to discuss the problem honestly with Sang-woo.

General dishonesty is a problem- however, absolute honesty isn't necessarily much better, as Dae-yeong discovers. Personally I'm surprised that fight didn't leave a mark. I'm even more surprised that I didn't actually realize how strange it was for Soo-ji to call Dae-yeong for help last episode until Sang-woo pointed it out. The implications of these discussions are rather obvious- and yet no one's able to get at the real truth of the matter, which is that the relationship's just not working out.

I don't know the original plan for "Let's Eat - Season 2" was- one would think that a two episode extension would result in more obvious filler, and yet writer Lim Soo-mi manages absolutely perfect pacing here, with just enough leftover mystery that I it's clear we'll need every minute of the last four episodes. If "Let's Eat" had any problem, it's that the ending came off as a little too abrupt- perhaps that's why Dae-yeong's last romantic pairing didn't work out? In any event, it seems unlikely that "Let's Eat - Season 2" will run into a similar issue with the conclusion.