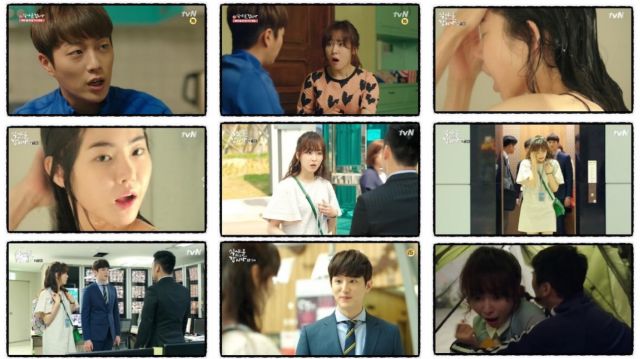 No, nobody is actually moving around dead bodies in briefcases. Again, "Let's Eat - Season 2" might have fooled me on that point except that the first season of "Let's Eat" tried to pull the exact same stunt. Although admittedly the question of what's going on with all that money is a pretty potent one. It's not really all that interesting compared to the question of how Soo-ji is planning to manage all her financial affairs. But it's decent as far as subplots go.

I do find it increasingly, subtly hilarious that Soo-ji has achieved her lifelong dream of a relationship with Sang-woo and rather than doing actual relationship stuff Soo-ji spends most of her waking hours trying to come up with elaborate plans to save money. And "Let's Eat - Season 2" is equally true to life in noting that workplaces tend to have rules against saving money, for pretty much no good reason that I can think of. What's more ridiculous- that Soo-ji insists on bringing the box with her when she has a locker, or that this is a rule that's actually being seriously enforced?

As for the rest of the cast, well, they're just moving in place really. If it's fireworks you want you'll have to wait until the next episode- the preview features all sorts of intense action that can't be explained away my a misleading context. Hm, I suppose it's possible that those scenes could just be from dream sequences. I sort of doubt it, though. What the cast is struggling against right now is that Soo-ji and Sang-woo don't really have much relationship chemistry. So now what?

This holding pattern is such that I was probably more interested than I was supposed to be in the story development regarding the pictures. I got the impression that this particular tryst hasn't been going on that long, which implies that the search for photographic evidence started before there was actually any suspicion of a crime to document. And yes adultery is still a crime in Korea- contrary to what the news blurbs said, it's still an important consideration in family law.

Beyond all that, well, there's not really much here. This is neither a good nor a bad episode by "Let's Eat" standards- which undoubtedly makes it a fairly decent episode by objective standards. That does tend to be the trouble some times with dramas that manage to hit high expectations. It's easy to nitpick the finer points when really, I just like watching Soo-ji squirm. If those are the best jokes I get per episode, I'm fairly satisfied overall.