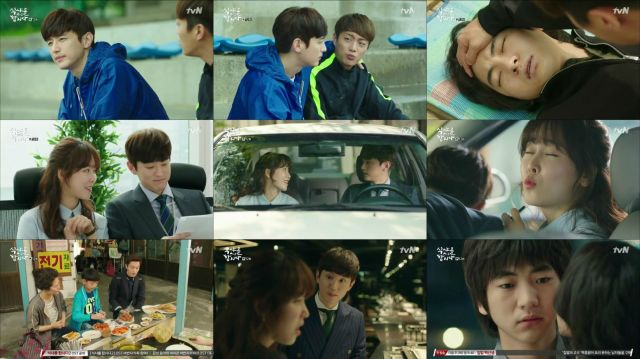 Contrary to what was implied by the preview, Dae-yeong and Sang-woo actually just start out by discussing their problems like adults and giving honest answers. It feels absurd for me to be surprised by this- of course that's what non-crazy friends do in that kind of situation. It's just...you know, the wacky plotting of television dramas is usually more prone to contrived misunderstandings. Writer Lim Soo-mi is above all that, though. She focuses on the important stuff in life. Like balancing checkbooks.

Of all of Soo-ji's character traits I think I like "struggles to pay the rent" the most. It's just so ridiculously relatable. And I also like how apparently she's really good with numbers, even though her actual job is writing. OK, that's probably more an appeal to me personally but still. While these traits aren't directly logical, they do make sense and Seo Hyun-jin really sells the way that Soo-ji lives according to an arbitrary personal code that doesn't always make sense.

As another example- it becomes really obvious really quickly here that Sang-woo is rich. Like, he genuinely doesn't care about financial questions at all, because he can afford it. Soo-ji fails to catch on to this and chooses to make a big scene about every expensive thing that he buys because she feels like they should be going Dutch. I mean geez, I can understand wanting to be egalitarian on general principle, but this takes on rather ridiculous proportions when Soo-ji insists on destroying her savings account for sentimental gestures Sang-woo quite literally can't appreciate.

For the sake of contrast, Hye-rim also loses an object of hers this episode. And even though she doesn't find out the real reason, Hye-rim still has the sense to accept compensation rather than stew about in her own juices. It's a nice comparison point- the implication is that Hye-rim has no problem with this because she's used to men doing her favors for free. Normally this might make Hye-rim seem like a bad person- but in between Soo-ji's storyline and the true cause that Hye-rim doesn't actually know, the younger woman actually comes out looking smarter for it.

A similar comparison is made between the kind of food you can find at a traditional market and the fancy stuff world famous chefs make. The parallels "Let's Eat - Season 2" draws between similiar situations are, and do a lot to enhance the deeper quality of the production. "Let's Eat - Season 2" is consistently very smart and very funny without ever getting too pretentious or complicated. It's an easy drama to love.