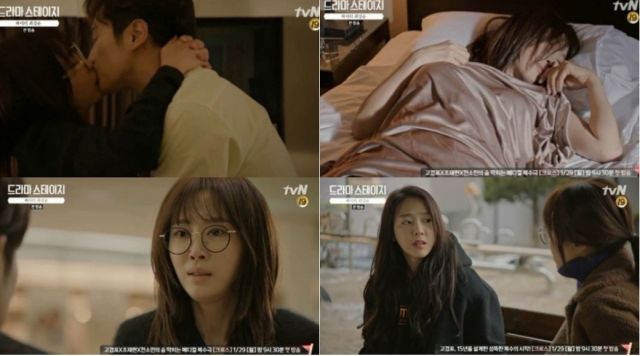 In the opening scene of "Drama Stage - Fighter Choi Kang-soon" normal company worker Kang-soon (played by Kang Ye-won) witnesses a man on the bus taking upskirt shots of another woman with his cell phone. The ensuing confrontation goes poorly, because none of the many bystanders are willing to back Kang-soon's position. An after work dinner further reveals disturbing sexist undercurrents in Kang-soon's male-dominated workplace. By the time the cute romantic montage hits I was already screaming no Kang-soon, it's a trap! Men aren't to be trusted!

"Drama Stage - Fighter Choi Kang-soon" is at its most powerful when it's being exposition of the various forms of non-physical danger women can find themselves in. The commentary on power imbalance is superb, especially as it sets up how Kang-soon could have made such a boneheaded mistake. After a really bad day, Kang-soon just wanted to believe the best of a man, any man. That's why it takes her so long to figure out something that should have been obvious from the beginning.

Where the drama gets much weaker is when we finally get the turn around to how Kang-soon is going to solve these problems. Now, I was expecting wish fulfillment from the beginning. That's how generally vile the men in the first portion of "Drama Stage - Fighter Choi Kang-soon" act. But the plan Kang-soo comes up with is so goofily elaborate, and not even really her plan, and based around such a fantastical situation, that it's hard to take any of the story seriously.

"Drama Stage - Fighter Choi Kang-soon" is, by contrast, far too ambitious with the scope of action Kang-soon takes. For that kind of story to be convincing we would need several episodes of build-up and background to make the conspiracy convincing. Maybe now that writer Yoo Young-joo has had some exposure she could get the chance to make a better version. But as stands, "Drama Stage - Fighter Choi Kang-soon" is thoroughly excellent in its strongest moments and thoroughly mediocre in its worst ones.