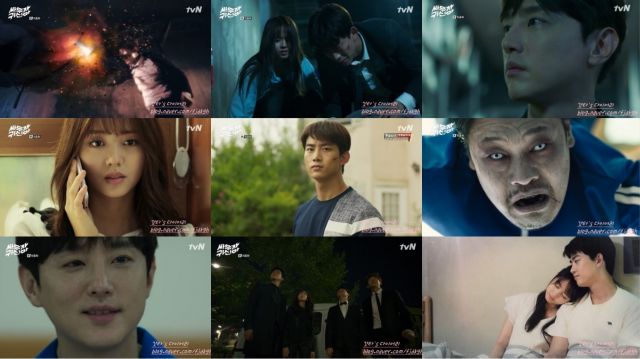 The true ending to the huge fight is a slight improvement to what closed out the last episode, since it at least involves proper use of the artifact. But overall I still felt a pretty strong general sense of emptiness at the close of "Bring It On, Ghost". A few sympathetic encounters with his mother can't change the fact that Hye-seong did some pretty horribly evil things, spiritual posession or not.

Even when we move past that, though, and start exploring Bong-pal and Hyeon-ji's lives in the aftermath...they're just sort of there. I'll admit, I did find it kind of funny that having just recovered from a coma Hyeon-ji's parents are demanding that she get into college right away to make up for all the lost time. In a better written story this would be social commentary on the sometimes ridiculous emphasis Korean culture places on education.

Alas, no, it's really just another weak obstacle to the Bong-pal/Hyeon-ji pairing that is of course easily overcome because the relationship between these two survived Hyeon-ji being dead. Anything else just seems ridiculously minor by comparison. Although the contrived silliness can, at times, be amusing. Hyeon-ji's girlfriends weren't kidding about needing help at the mass blind date.

Without better context, though, so much of "Bring It On, Ghost" just falls flat, and that really is a shame. Where the Seo Hyun-jin cameo a few episodes back was too boring, the Yoon Doo-joon cameo this episode has the exact opposite problem- he just does his usual "Let's Eat" schtick with no real variation. This lack of inventiveness has characterized so much of "Bring It On, Ghost". This drama does what it does well, but there's no ambition to seriously go beyond the most basic tropes one would expect to see in a story about fistfighting with ghosts.

The main aspect of "Bring It On, Ghost" that has remained consistently strong is the chemistry between Ok Taecyeon and Kim So-hyun, and to a lesser extent Kang Ki-young and Lee David, in their very goofy support roles in the ghostbusting team. For all these strengths time and again "Bring It On, Ghost" continued to test my patience again and again by relying almost entirely on the strength of its performers to carry a very underdeveloped script. The squandered potential is what really galls me- I can only hope someone with lower expectations was able to get more enjoyment out of this project than I did.