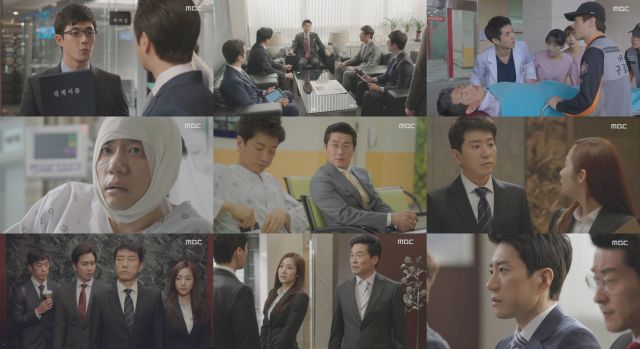 It takes half the episode for anyone at the law firm to figure out where Seok-joo is. Strangely enough, his presence is clearly missed- everyone's in disaster mode trying to deal with the problems posed by his absence. Symbolically that says all we really need to know about Seok-joo's life right now. He is valued as an instrument in the legal machine- not an actual flesh and blood person. Note how Ji-yoon completely biffs a chance to find Seok-joo because she decides it's more important to deal with the legal stuff than an apparent medical emergency.

I didn't think the gossip storyline had much legs in the first two episodes- the only reason it still existed at all was because Seok-joo couldn't be bothered to put in the effort to make it go away. The thematic significance here is striking- because Seok-joo  won't deal with personal stuff, now in amnesiac form, he's stuck with this woman that he didn't even like that much. This episode is stating pretty loud and clear that personal lives matter, even in the workplace.

Amnesiac Seok-joo, when compared to his previous meaner version, is pretty much the same person though. He still doesn't care, and his diffidence is particularly striking in the hospital scenes where Seok-joo demonstrates that he still possesses his amazing powers of lawyering. Put in a high class law firm that deals with scummy men in suits, that's who he helps out. Put in a hospital with people who've just had a run of bad luck, and Seok-joo behaves almost the exact same way.

Given that the concept for "A New Leaf" pretty much boils down to "bad lawyer gets amnesia, becomes a better person", it's somewhat surprising to see here that Seok-joo doesn't really need to actually change in order to become a good person. An alteration of the scenery is enough to alter his reactions. Up until now Seok-joo's apparent indifference to anything that isn't rude behavior has been his main asset at the firm. But without that everyday routine, it may well be these same personality traits that ultimately turn Seok-joo against his current employer.

The amnesia plot device is actually used quite well here. Most of the characters don't know Seok-joo has amnesia, and the ones that do have a vested interest in keeping this information secret. The result is a series of odd scenes where no one actually has any idea what's going on, but the force of Seok-joo's reputation, personality, and remembered legal skills is enough to keep a fairly persuasive illusion. For how long is, as yet, unknown.