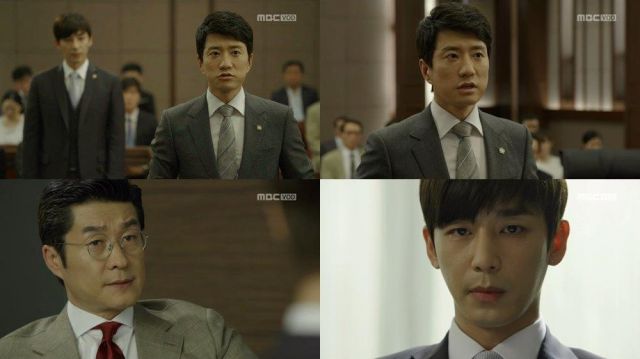 The drama has decided its final conflict will be a battle of wills between Seok-joo and Ji-won. Too bad we know almost nothing about Ji-won's actual personality. "A New Leaf" has had a lot of trouble developing its characters beyond Seok-joo. I can't decide whether this was because of poor scripting or whether the drama's material was just too ambitious from the get go. There's just not enough time to do the series the epic justice it so badly wants to have.

The lawyer battles here are a fair matter of turnabout. Seok-joo doesn't just have to face the logistical obstacles the drama has been discussing up until this point- he also needs to fight within the context of an explicitly corrupt system that just gets worse the more they try to challenge its credentials. I like this drama's cynicism- "The Attorney" was a big blockbuster last year on the strength of its legal premise, yet because it dealt with law under a dictatorship, it was easy to dismiss the problem as being a thing of the past. Not so here.

Consider, for example, what happens with Seon-hee. I doubt very much her experience is an isolated incident. The law is politics- oftentimes literally, given how the people in charge are either appointed or elected. There is, naturally, nothing concrete and nothing that can be easily proven- I doubt this drama is going to end in a flawless victory for Seok-joo. The negative undertones are just too strong.

Ji-yoon finally gets something to do in this regard, even if it's not much. She realizes that the system is messed up, and, well, that's it. Ji-yoon has the very awkward position of being an underpowered character in a drama that's an all-out brawl between people who know very well what they're doing. There just isn't much she can contribute to the proceedings, which makes it somewhat disappointing that Ji-yoon hasn't worked more as a cipher. An intern in the process of being disillusioned would be a fitting contrast to Seok-joo's rediscovery of his past.

At this point, though, it's pretty clear that Seok-joo's amnesia has always just been a plot device to get him reevaluating his life, and having to reorient his legal mind to find workarounds to the abuse in the system rather than exploiting it properly. I really liked the way he countered Ji-won- a fitting counterattack against a system that's clearly rotten to the inside.