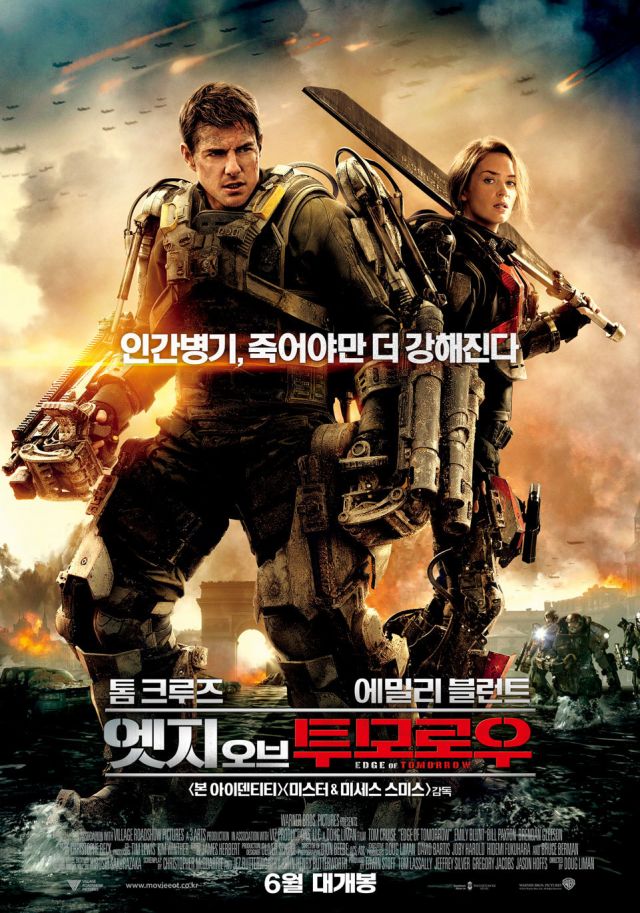 Last weekend Doug Liman's science fiction adaptation "Edge of Tomorrow" snatched over 1.5M admissions to take gold, and while its haul was significantly less this time around, the 679K (40%) it pulled over the weekend was enough to secure a second reign. Cruise and his sci-fi flicks go down like a treat in Korea, and paired with the tale's Japanese origin, Liman's futuristic frenzy has thus far managed to amass over 3M admissions ($25M). And while Cruise and his co-star Emily Blunt were blazing at the top, two new local films made their entry into the top ten in the form of "Gyeongju" and "For The Emperor".

While there was some shuffling in the lower-middle order, one and two remained the same as "Edge of Tomorrow" and Kim Seong-hun's action drama "A Hard Day" were unmoved. "A Hard Day", starring Lee Sun-kyun, attracted 366K filmgoers (20.7%) to once again secured second place. The Showbox product came out late last month and has since moved its total tally to 2.1M ($16.3M).

Follow Kim's intriguing piece came Park Sang-joon's noirish gangster flick "For The Emperor" starring Lee Min-ki and Park Sung-woong. Released on the 12th, "For The Emperor" opened its Korean account to 423 screens and across them claimed 12.9% of the box office pie (223K admissions). A modest start, all things considered, but it was enough to dislodge the very popular "X-Men: Days of Future Past" down to fourth.

Marvel's mutants spent two weeks at the top during the last two weeks of May, and its fourth week out in Korea saw it add another 134K stubs to its cause. This week, however, was the first where the "X-Men" looked to be running out of steam, but after 4.1M admissions ($32.9M) and four weeks in top ten it's time was well spent. "Maleficent" followed the aging mutants in fourth with 126K (6.7%), while director Lee Jeong-beom's, the man behind the 2010 hit "The Man From Nowhere", latest film "No Tears for the Dead" slipped to sixth with just 35K (2%).

Jang Jin's action comedy "Man on High Heels", starring Cha Seung-won, entered the fray earlier on in the month, but has been unable to gain traction. Here, the film occupied seventh place with almost 33K (1.8%), falling just the one position and moving its bottom line onto $2.4M (312K admissions). The other new Korean entry, Zhang Lu's "Gyeongju", managed 25K over 318 screens, while the critically acclaimed "Her" stay steady in ninth with just 17K (impressively over just 69 screens). Lastly, the Italian film "The Best Offer" narrowly outplayed the latest "Detective Conan" animation from Japan to hold down tenth place with 15K admissions.