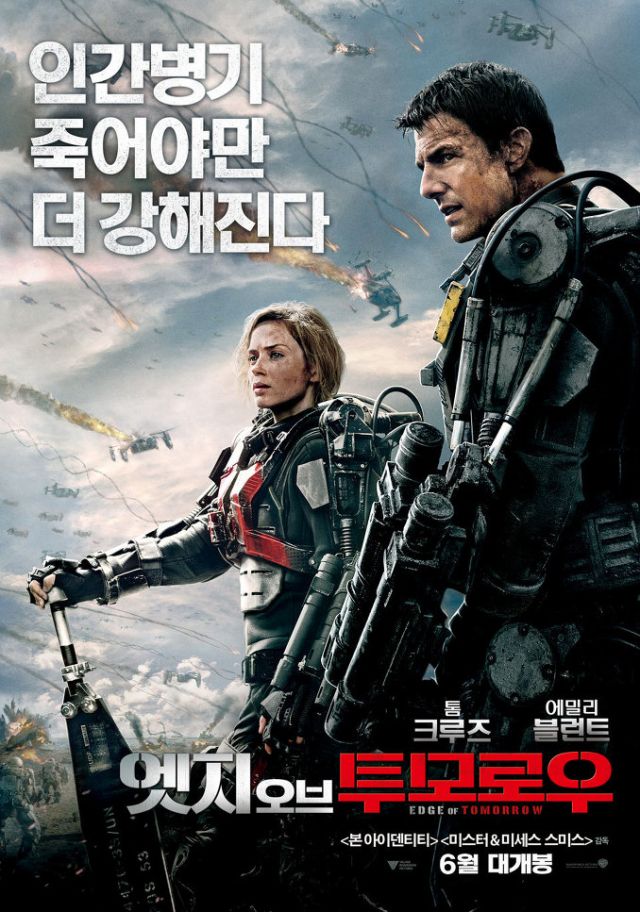 "Edge of Tomorrow" dislodges Marvel's mutants and cruises into first…

Tom Cruise's latest, "Edge of Tomorrow", opened its Korean account over the weekend and was welcomed by some 1.2 million cinephiles. Based off of the military science fiction novel "All You Need Is Kill" by Hiroshi Sakurazaka, the film sees Cruise star alongside Emily Blunt in an action-packed outing that has already amassed $140M worldwide. Cruise has long been a popular personality in Korea and helped the film dislodge Marvel's mutants by capturing 42.2% of the sales in week one.

Last weekend "X-Men: Days of Future Past" continued its successful run by claiming over 800K; this week, however, the film slipped to third with 495K (13.5%). Thus far Marvel's time-travelling mutants have amassed a total ticket tally of nearly 4M ($31.3M), and is set to become the fourth highest-grossing film of the year. Kim Seong-hun's "A Hard Day", meanwhile, managed to retain second place and added another 495K (15.5%) to its cause. The film, Kim's second, was released late last month and has thus far accumulated 1.5M admissions ($11.9M).

Robert Stromberg's fantasy flick "Maleficient" took fourth place and its 342K (10.3%) was enough to push Disney's live-action outing over the million admissions mark. The film has received mixed reviews, with most critics praising Jolie's performance while reserving some scepticism for the film's ambitious re-imaging of the classic tale of "Sleeping Beauty".

The only other Korean films to feature this week were Lee Jeong-beom's "No Tears for the Dead" and Jang Jin's action comedy "Man on High Heels". Lee's previous film "The Man From Nowhere" was a massive success back in 2010 where it claimed 6.2M admissions through the help of one Won Bin. But his latest piece only managed to attract 342K (7.7%) during its opening weekend. The film was allocated 480 screens from which to pool, almost a hundred more than Jang's new comedy, and struggled somewhat to launch itself into the upper stratosphere of the chart. In sixth came Cha Seung-won as the sexual confused, yet brutal, detective Ji-wook in "Man on High Heels"; a violent and comical affair that snatched 4.2% of the sales (129K).

The Japanese anime "Lupin the 3rd vs. Detective Conan: The Movie" fell just the one place to seventh (74K – 2%), a popular franchise that features regularly in the Korean charts when they come about, while the American psychological horror "Oculus" claimed eighth with 41K (1.2%) to its name. And it was the critically acclaimed drama "Her" (31K – 1%) by Spike Jonze and animated adventure film "Blackie & Kanuto" (14K – 0.4%) that rounded out the weekend in ninth and tenth respectfully.